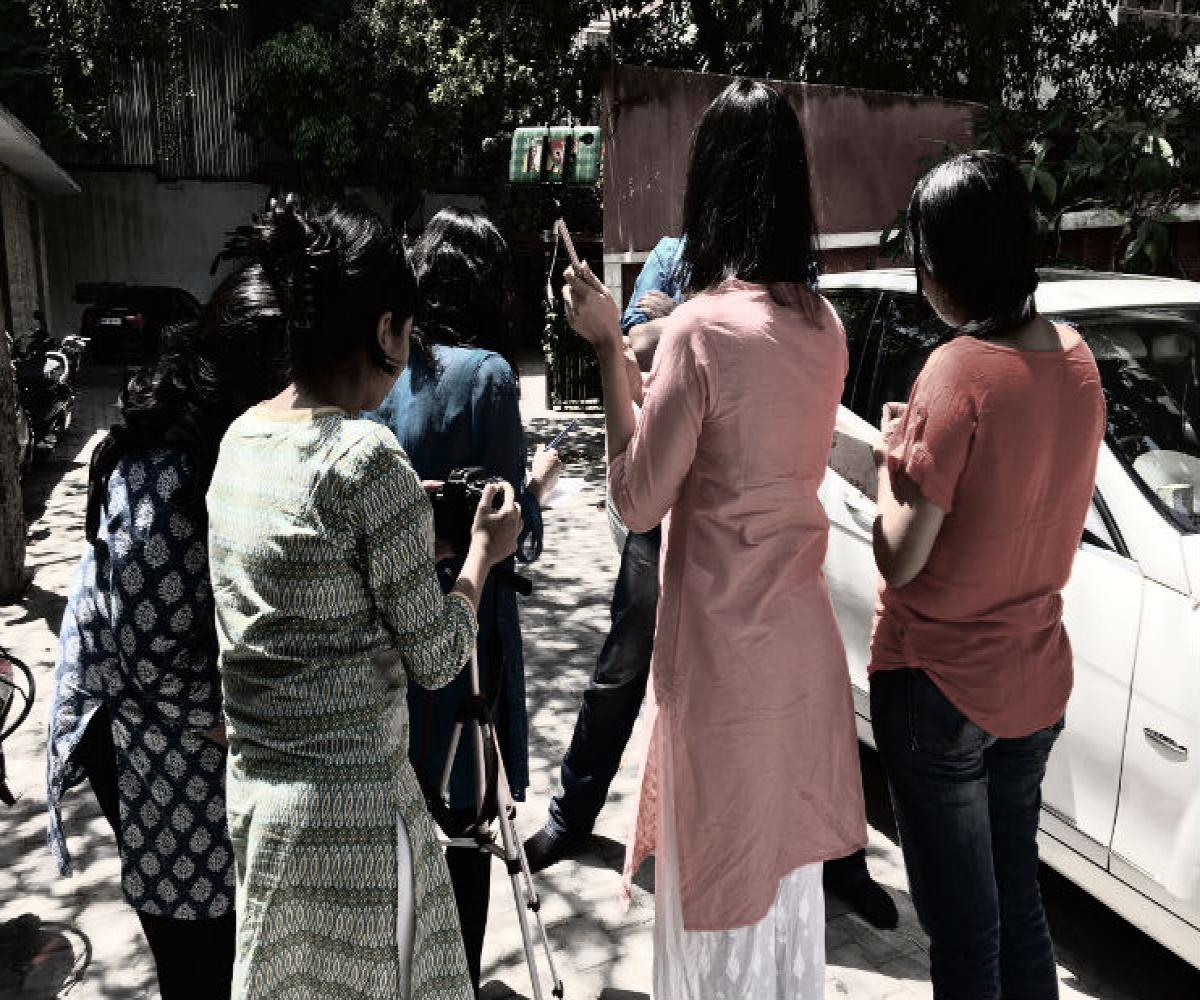 Image for representation
2017 has not been a good year for the Indian press, to say the least. According to a comprehensive report titled ‘The climate for free speech in India’ by media watchdog The Hoot, not only were 11 journalists killed in the country, 46 were attacked, 12 were threatened and 27 faced police action including detentions, arrests and cases filed.
Of the 11 scribes murdered, “in only three of these cases is there a clear linkage with their journalistic work. One murder, that of Karnataka journalist Gauri Lankesh, took place in Karnataka and two others in Tripura,” The India Freedom Report revealed.
Some of the key findings in the report showed that while Maharashtra had the most number of defamation cases, the number went down considerably in Tamil Nadu after former chief Minister J Jayalalithaa’s death in December 2016. Meanwhile, Karnataka saw the most state action taken for internet-related incidents and social media posts.
What stood out in Andhra Pradesh was that a significant number attacks on journalists came from a politician-criminal nexus.
Here are some other significant findings from the report.
Murders
The three murders which could be linked to the victims’ journalistic work were that of Kannada writer and journalist Gauri Lankesh; Sanatanu Bhowmik, a journalist with Din Raat news channel in Tripura; and Sudip Datta Bhaumik, who worked with a Bengali newspaper in Agartala. While Gauri and Sudip were shot, Santanu was hacked to death, allegedly by Indigenous People’s Front of Tripura (IPFT) supporters.
Attacks
What is most prominent about the attacks on journalists in 2017 was that they were mostly targeted by police (13 cases) and politicians (10 cases).
Andhra Pradesh saw at least three attacks on journalists reporting on illegal mining and corruption, perpetrated by the politician-criminal nexus between February and April 2017.
Nagarjuna Reddy, a freelancer, wrote an article in a local Telugu magazine Mattichetula Basa about Chirala constituency MLA’s alleged corruption. He was attacked in full public view in February 2017. No one has been arrested so far.

Stringers are easy targets for attacks, noted The Hoot, quoting Ch. Krishnanjeneyulu, President of the Andhra Pradesh Journalists’ Forum. Rama Reddy and AD Babu, two others who were attacked in Andhra Pradesh, were both stringers. While Rama was a stringer with iNews, Babu was working for Sakshi Media in Vishakhapatnam district.

“There was also an assault by police on an Eenadu photographer. In Rajamundry in Telangana, a TV channel reporter was beaten up by a doctor whose business practices were being reported on. And the writer Kancha Ilaiah was attacked with slippers and stones in Telangana where Arya Vyasa organisations have been campaigning for a ban on his book and burning his effigies,” the report added.
Threats and police cases against journalists
2017 saw a number of journalists threatened with murder, physical assault as well as sexual violence on multiple occasions.
“Journalists from NDTV India, Firstpost, The Quint, The News Minute, and the Covai Post in Coimbatore faced threats, including those of rape, on social media,” The Hoot says. There were also threats made against creative expression, a case in point being reward offerings for beheading actor Deepika Padukone over the Padmaavat controversy.
Police action against reporters also witnessed an all-time high point in 2017.
For instance, Frontline magazine correspondent Kunal Shankar was booked for trespassing in the University of Hyderabad on the first death anniversary of Rohith Vemula in January 2017.
In August, Mirror Now’s Himanshi Chaudhary faced charges of harassment, intimidation and breach of privacy from former CBFC chief Pahlaj Nihalani.
There were also cases filed against journalists in Kerala and Tamil Nadu. Sajeev Gopalan, who works for Malayalam newspaper Kalakaumudi alleged that the police assaulted him when he was working on a story about attacks on two Thiruvananthapuram girls. He was hospitalised as well.
Censorship and self-censorship
Censorship, in many forms, affected not just news outlets (print, TV and online), but also books, individuals and radio channels.
The perpetrators of this censorship included political parties and Hindutva activists, and also government offices such as Department of Telecommunications, CBSE and National Commission for Scheduled Tribes, among others.
There were many examples of restricting media access as well. For instance, in August 2017, “after weeks of political violence in Kerala between the Communist Party of India-Marxist (CPM) and BJP, the media gathered at the hotel where the leaders of the two parties were meeting to broker a truce. Pinarayi Vijayan, the chief minister of Kerala, chose to gag the media on that occasion and had them evicted from the room,” the report said.
The Congress party was also seen blocking media outlets which gave it unfavourable coverage from its press conferences, much like Gujarat MLA Jignesh Mevani who recently wanted to exclude Republic TV at a recent press conference in Chennai.
Although The Hoot report does not mention it, the arrest of cartoonist Bala in Tamil Nadu where the AIADMK is in power, was slammed by many as an attempt to curb press freedom.

But the most troubling aspect perhaps is the self-censorship some media practiced, on some very important issues.

For starters, both Times of India and The Economic Times took down reports about India slipping three places in the International Press Freedom Index put together by global media watchdog Reporters Without Borders.
2017 also saw many resignations of media persons from prominent positions which could be linked to declining press freedom.  In September, Hindustan Times editor Bobby Ghosh resigned citing “personal reasons”. However, speculation ensued that it was linked to “the Hate Tracker the newspaper had begun in July, to document instances of hate attacks from around the country.” Later, “HT welcomed PM Modi to its annual summit, leading to more speculation about sacrificing an editor to get the PM to attend.”

There were also many stories which exposed malpractices and corruption in the incumbent government, which were either not picked up by the mainstream media or taken down later. A significant example is that of The Wire’s story on Jay Shah, BJP chief Amit Shah’s son.

“NDTV’s Srinivasan Jain wrote a Facebook post which said that a report by him and a colleague on loans given to Jay Shah’s companies was taken down from NDTV’s website for ‘legal vetting’ and not restored,” The Hoot noted, adding that Republic TV and Times Now, among other mainstream media, did not follow up on the story either.
Another story which saw a resounding silence from the media, and has garnered attention now because of recent events, is that of Justice Loya’s death. Justice Loya was handing the Sohrabuddin case and the story of his death was published in long form magazine Caravan towards the end of 2017. It was also not picked up by other media outlets.
Internet-related offences
What is most troubling is that even though section 66A of the IT Act was struck down by the Supreme Court in 2015, it was invoked in at least six out of 32 cases of internet-related offences across the country, along with other provisions of the law.
The report says, “A local court in Hyderabad invoked the annulled Sec 66A to convict a man, and the BJP IT Cell Karnataka also filed a complaint request under Section 293 of the IPC and 66A of the IT Act when the BJP complained about a vulgar cartoon on the prime minister.”
Some notable cases from the south here include one where a social activist from Andhra Pradesh was arrested for posting “objectionable content” on his Facebook page ‘Political Punch’ against Chief Minister Chandrababu Naidu and his son Nara Lokesh.

The Karnataka police in December registered 12 FIRs under IPC Sections 153 (provocation with intent to cause riot) and 153A (promoting enmity between different groups) for social media posts which were ‘inciting’ in nature. One of the FIRs was also against Lok Sabha BJP MP Shobha Karandlaje.

There were also a large number of internet shutdowns in the country – at least one in every month of 2017. While 2016 recorded 31 shutdowns, the number more than doubled in 2017 with 77 shutdowns, the most being recorded in Jammu and Kashmir (40).

Bill on data protection to be ready by March, Centre tells SC