New Delhi (RAHNUMA): The Bharatiya Janata Party lawmaker projected by the party as its youth leader, was elected a Member of Parliament (MP) from India’s Bengaluru South constituency in 2019. The newly-elected parliamentarian is known for having made controversial posts in the past.

A legislator from India’s ruling Bharatiya Janata Party (BJP) is being trolled online over one of his old tweets, which has found its way to the social media spotlight despite having been deleted in 2015.

Young BJP lawmaker Tejasvi Surya fell victim to trolling on Twitter after one of his controversial old tweets – “95% Arab girls never had orgasm” – resurfaced and started doing the rounds on the microblogging website.

The 29-year-old Karnataka lawmaker was quick to delete the post, but the screenshots have gone viral.

Surya had tweeted in 2015: “95% Arab women have never had an orgasm in the last few hundred years! Every mother has produced kids as act of sex and not love.”

While some termed the tweet as an “exposure” to Surya’s thinking towards women, others remarked that the orgasm of Arab women is none of his concern and that his tweet his “filthy and vulgar” towards women. 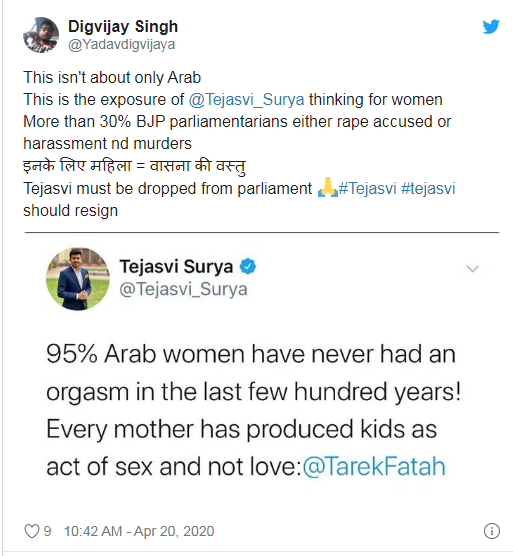 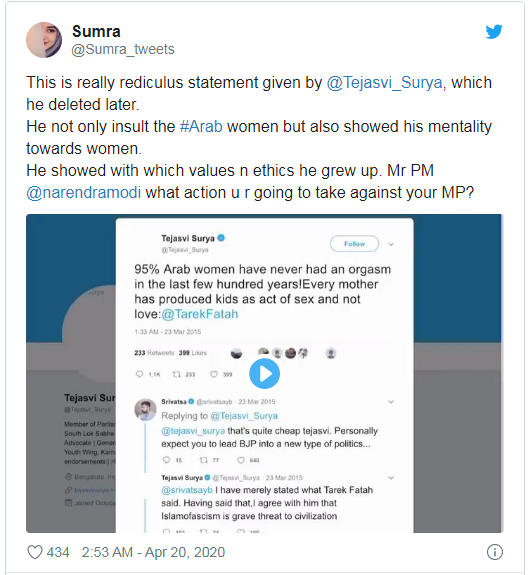 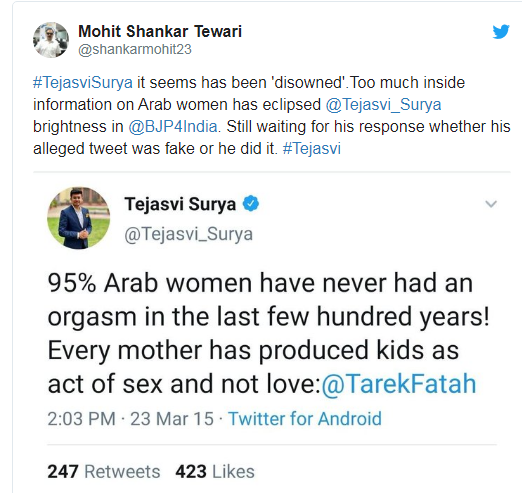 ​A few demanded that he apologises to the Arab countries.

​This is not the first time that the young lawmaker has stormed into a controversy.

Some of his old tweets, which displayed hate against a particular community were also brought up. One of tweets included asking India’s ruling BJP should become openly “Hindu party”. The BJP leader has also at a point expressed displeasure at the idea of reservation for women in Indian Parliament.

​Tejasvi Surya was a star candidate for the BJP during 2019 parliamentary elections. He was largely projected as a youth candidate and won the polls from his Bengaluru South constituency with a massive margin of nearly 300,000 votes.

Is Islamophobia in India isolating it from its closest Gulf partners?