(RAHNUMA) Azim Hashim Premji is an Indian business tycoon, investor, engineer, and philanthropist who was born on 24 July 1945 in Bombay, India in a Muslim family. His father was a noted businessman and was known as Rice King of Burma. Muhammad Ali Jinnah, the founder of Pakistan, invited his father Muhammed Hashem Premji to come to Pakistan, he turned down the request and chose to remain in India.

Today Azim Premji is informally known as the Czar of the Indian IT Industry. He was responsible for guiding Wipro through four decades of diversification and growth to finally emerge as one of the global leaders in the software industry. In 2010, he was voted among the 20 most powerful men in the world by Asiaweek. He has twice been listed among the 100 most influential people by TIME Magazine, once in 2004 and more recently in 2011. For years, he has been regularly listed as one among the 500 Most Influential Muslims of the world.

He is currently the tenth richest person in India with an estimated net worth of US$7.2 billion as of October 2019. In 2013, he agreed to give away at least half of his wealth by signing The Giving Pledge. Premji started with a $2.2 billion donation to the Azim Premji Foundation, focused on education in India.

Having successfully built Wipro to be a business leader, Azim Premji felt the need to contribute to a social cause and address the various developmental challenges facing the country. The Azim Premji Foundation has been funded solely by Azim Premji by way of transfer of his personal shares to the Foundation. The objective of the funding was to facilitate the universalisation of primary education rather than serve as a constraint in achieving it. The Foundation began its work in Karnataka and Andhra Pradesh in 2001 where the state leadership and education departments were supportive of its mandate.

Azim Premji made history in 2019 as Asia’s most generous philanthropist by donating $7.6 billion worth of Wipro shares to his education-centered foundation, raising his total lifetime giving to $21 billion. Established in 2000, his eponymous foundation now works with more than 200,000 public schools across India to train teachers and provide better curriculums, among other initiatives. “A role model for all of us. I wish more people would follow his example,” says Anu Aga (a 2010 honouree).

Premji is one of the 30 outstanding altruists we’ve chosen for our 13th annual Heroes of Philanthropy list which honors billionaires, entrepreneurs, and celebrities across the region who are committed to solving some of the most pressing issues facing the Asia-Pacific.

He is the only Indian to make it to the list of top 10 donors issued by Forbes, which is dominated by US billionaires.

At the beginning of April itself, Azim Premji pledged Rs 1,125 crore towards the fight against COVID-19. The money was donated with the intention of helping the medical and service fraternity – who are at the frontline of the battle against the pandemic – and people belonging to economically backward sections of society.

Of this Rs 1,125 crore ($132 million), the Azim Premji Foundation has donated a total of Rs 1000 crores, Wipro has reportedly donated Rs 100 crore, and Wipro Enterprises has committed Rs 25 crore to help the battle against the COVID-19 outbreak.

According to Forbes’ data, 77 billionaires had donated to various causes that have to do with coronavirus relief by April end. 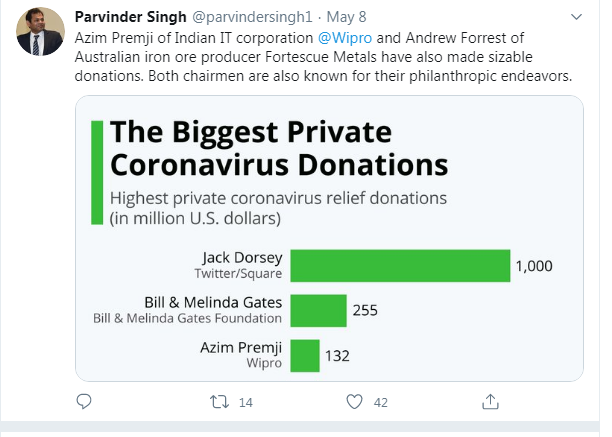 Twitter CEO Jack Dorsey stands at the highest, with a donation of $1 billion.

The second and only other billionaire to succeed India’s Azim Premji is Microsoft founder Bill Gates along with his wife Melinda Gates who has donated $255 million.

According to the compilation of data by Forbes, 77 billionaires had donated to different causes to do with coronavirus relief till the end of April.

Wipro said it would facilitate a comprehensive on-the-ground response in specific geographies, focused on immediate humanitarian aid, scaling up healthcare facilities including containing the coronavirus outbreak and treating the affected ones.

“These responses will be carefully coordinated with relevant government institutions and would be executed by the Azim Premji Foundation’s 1600-person team, in collaboration with many of its more than 350-people strong civil society partners across the country. These efforts will fully leverage the technology expertise, sourcing systems, infrastructure, and distribution reach of Wipro,” said the company.

Premji has said that being rich “did not thrill” him. He became the first Indian to sign up for The Giving Pledge, a campaign led by Warren Buffett and Bill Gates, to encourage the wealthiest people to make a commitment to give most of their wealth to philanthropic causes. He is the third non-American after Richard Branson and David Sainsbury to join this philanthropy club.

“I strongly believe that those of us, who are privileged to have wealth, should contribute significantly to try and create a better world for the millions who are far less privileged”- Azim Premji

China threatens retaliation at 'unreasonable suppression' of Huawei in US

There are 11 million expatriates in Saudi Arabia and Indians are around 2.6 million: Ausaf Sayeed

‘Sanatan Dharma’ to be included in AMU curriculum