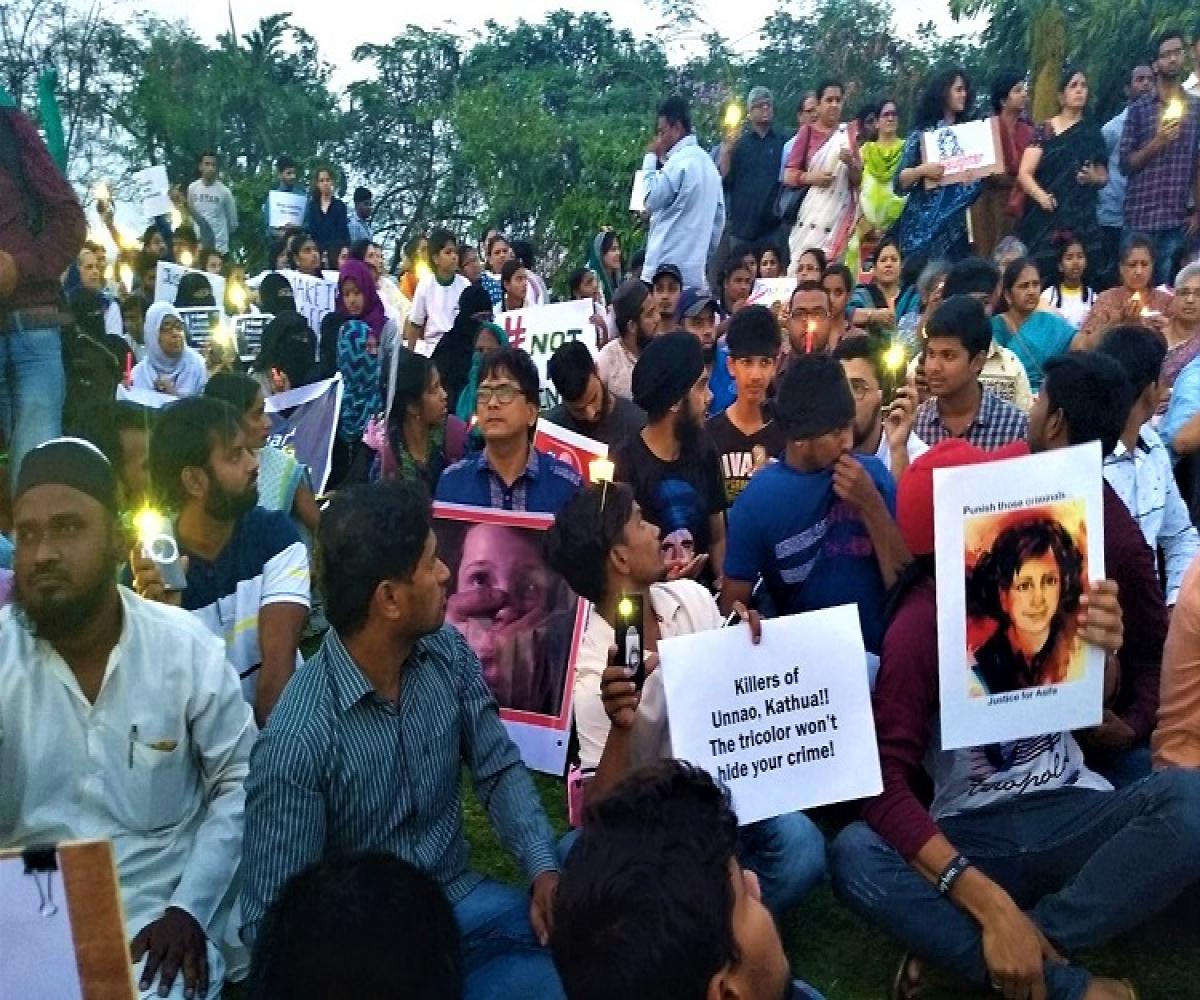 As the uproar around the brutal rape and murder of an 8-year-old girl in Kashmir grows louder, the residents of Hyderabad and Bengaluru took to the streets in protest, demanding that justice be served.
The citizens who gathered in both cities also protested against the rape of a teenager in Unnao, Uttar Pradesh by a sitting BJP MLA, Kuldip Singh Sengar.
Over 100 people gathered at Necklace Road in Hyderabad to demand justice. The protest saw the participation of families, activists, students and many more. People began gathering near People’s Plaza at around 5 pm, with posters and banners that read ‘Beti Bachao, BJP Bhagao’ and ‘Restore Rule of Law’.
Slogans rang in the area against the BJP government, which included ‘Narendra Modi Murdabad’, and ‘Punish the accused’.

A candlelight vigil was held at the venue, after which prayers were also conducted.
While the brutal rape and murder of the 8-year-old took place in January, chilling details of the crime emerged recently after the Jammu and Kashmir Police’s Crime branch filed the charge sheet against the eight accused. What makes this case even more dreadful is that some of the accused are police personnel.
“Appalled by the reaction of the state towards something so heinous as this crime towards a small child. Such a crime was committed against a child because she belongs to a certain community. And the fact that state actors use rape as a tool to propagate religious ideologies itself is so disturbing. That is what makes this case so distinct from others,” said Evelyn Samuel, a student and one of the protesters at the venue.
“The silence of Mehbooba Mufti, the present CM, speaks a lot. Earlier, we thought that Manmohan Singh is a silent Prime Minister but Modi proved that he is the most silent PM India ever had. This crime stands out because it has tacit support from BJP cabinet ministers and lawmakers. The government, instead of sacking the ministers, is still rallying behind the perpetrators,” said Niazi, a Kashmiri student from Maulana Azad National Urdu University.

“The culprits should be hanged. That’s the only way people will fear the law. If we don’t have such punishments, men will pick up any girl and rape them. What is this, are we going back 50 years? Unless there is strict action, people will take justice into their own hands,” said Khalid Rusul, another protestor in Hyderabad.
Meanwhile, a group of citizens in Bengaluru gathered at Freedom Park on Friday and held a candlelight rally.
Many who were gathered at the event, said that they were worried about the rising incidents of rape across the country, and had come out to register their dissent.
They also collectively condemned those who turned a criminal act into a political issue.

Raise your vocies until our women and children are safe, say citizens gathered at Bengaluru’s freedom park, protesting the incidents of rapes in #Unnao and #Kathua. pic.twitter.com/ihbiVVVn2h
— Arun Dev (@ArunDev1) April 13, 2018

“It is clear that the bar association which supported the accused is backed by the RSS and BJP. It was an organised crime and they wanted to drive out the minority community from the place,” Advocate and member of People’s Union for Civil Liberties (PUCL), Bindu Doddahatti, was quoted as saying.
Breaking his silence on the two cases, Prime Minister Narendra Modi on Friday promised justice and said that the incidents have caused outrage and shamed the country.
Modi’s comments at a function in New Delhi came hours after the Central Bureau of Investigation (CBI) got into the act by detaining and questioning rape accused BJP MLA Kuldip Singh Sengar in Uttar Pradesh while two BJP Ministers in the Jammu and Kashmir coalition led by the PDP resigned for taking part in a rally in support of the accused in the rape-murder of the eight-year-old.
“The incidents that are in discussion in the country for the last two days do not reflect good for any civilised country. This is shameful. It’s an insult to freedom fighters who gave their lives for the independence of this country. We are all ashamed as a society, as a country. Such incidents in any part of the country or a state shake humanity. I want to assure the country that no culprit will escape. Justice will be done and it will be complete justice. The daughters will get justice. We all will have to join hands and remove this evil from the society,” Modi said.

PM Modi breaks his silence on Kathua and Unnao rapes, says justice will be done

At least 4 students kill themselves, hours after Inter results announced in Telangana

India must ask Israel to abstain from aggression: Muslim leaders