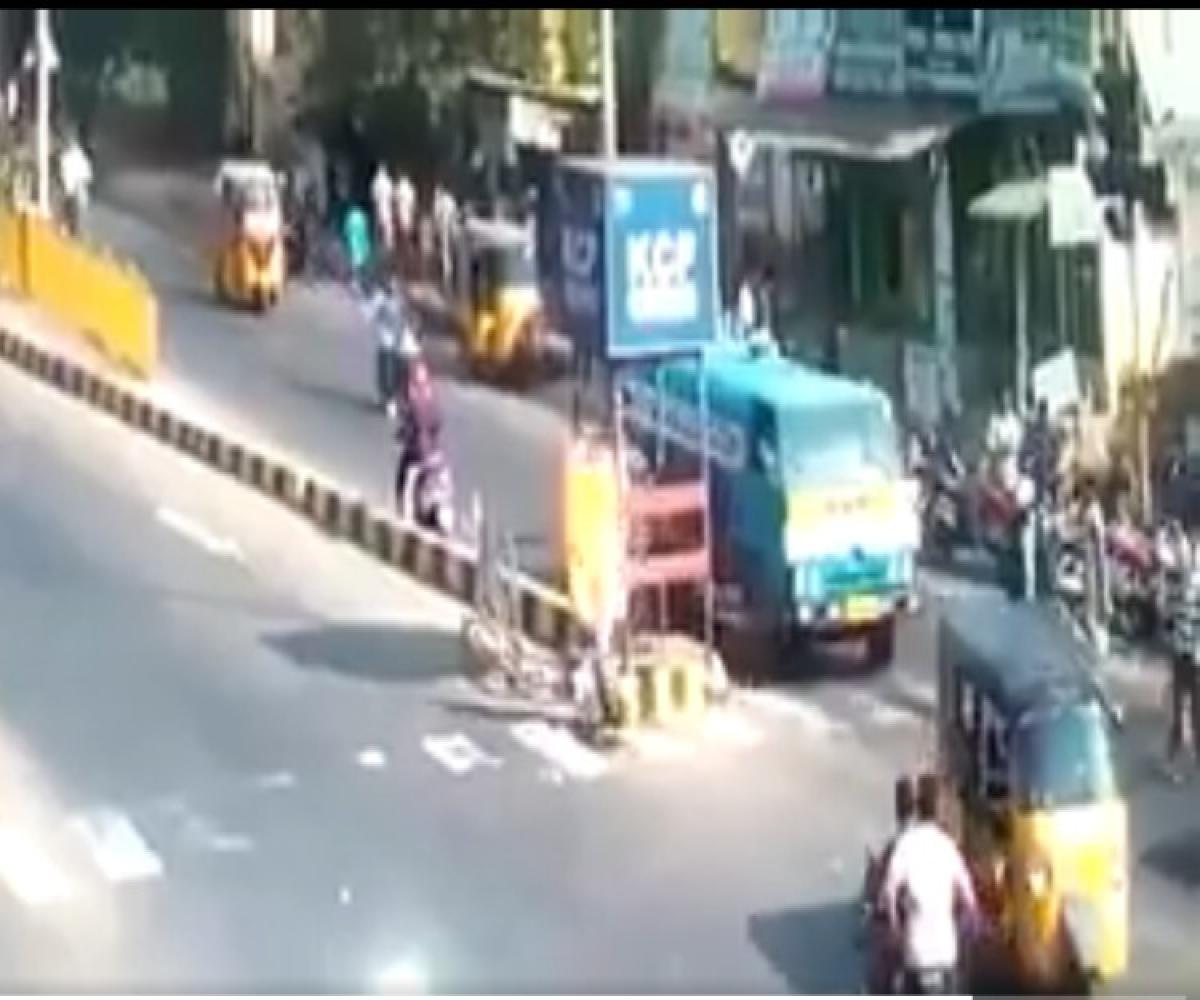 Screenshot
Standing in the junction of Pendurthi road in Visakhapatnam, a 50-year-old man set himself on fire in broad daylight. A CCTV video of the horrific suicide bid shows the victim – M Mahalakshmi Naidu – standing at the junction, suddenly engulfed in flames, even as vehicles drive past him.
Video (Graphic content, viewer discretion advised):

In a shocking incident a 45 year old man torched himself at busy junction of Visakhapatnam. Sifted to KGM Hospital where he is battling for life. The person identified as Mahalaxmi Naidu was booked for his wife murder and out on bail. #AndhraPradesh pic.twitter.com/GDOXGT30NK
— Aashish (@Ashi_IndiaToday) January 10, 2018

An inspector belonging to the Pendurthi police station, who was passing by, immediately doused the flames, even as a panic-struck crowd watched on.
Pendurthi CI J Murali told TNM that the incident took place around 10 am on Wednesday. “I just came back to the station from the Janmabhoomi programme, and saw the crowd gathered in front of the police station. Later, the constable and I doused the flames and rushed him to the hospital.”
According to the police, Naidu, who is a security guard, chose to immolate himself allegedly after a dispute with his children over the sharing of wealth.
He has been admitted in the KGB Hospital. Naidu’s condition is critical and has reportedly suffered 70% burns, police said.
Another video shows Naidu completely engulfed in flames. But no one attempts to intervene. The clip shows two youngsters, who have fallen from a bike, picking up the bike and speeding off.
“The crowd gathered wanted to help but they panicked,” said Murali.
Police have not registered a case so far.
The Inspector said, “We are yet to take a statement from the victim. After taking the statement, we’ll file the case. We suspect that the reason for the suicide bid is over wealth-sharing.”
“His children are reportedly not taking care of him,” he added.
According to the police, the victim is a murder accused. He was earlier arrested for killing his wife in October last year with a cricket bat. He has, however, been out on conditional bail.

Plugging Aadhaar leaks: Here is how the new Aadhaar Virtual ID will work