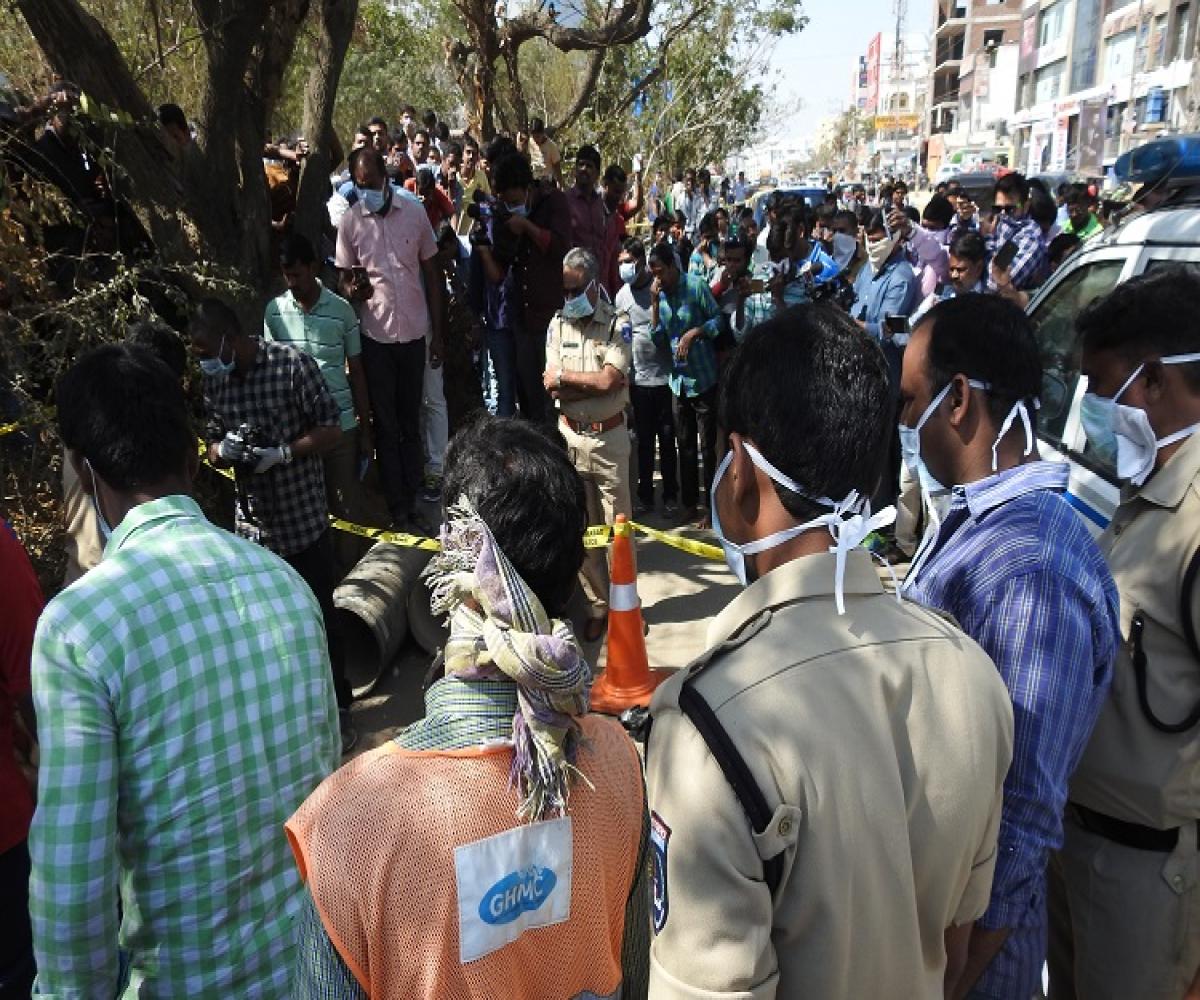 Image: Nitin B
The eight-month pregnant woman, whose body was found chopped up in two sacks in Hyderabad, was allegedly killed in cold blood for becoming a ‘hindrance’ to an extramarital affair, said the Cyberabad police.
The 32-year-old victim, Bingee alias Pinky, was killed last month and her body was dumped near Hyderabad’s Botanical Gardens in Kondapur on January 30.
After struggling to find clues initially, the police said that CCTV footage of two people on a bike led to a breakthrough in the case. The CCTV footage had shown the duo riding on a bike, with the pillion rider carrying a heavy bag. The pillion rider was a woman, while a man was riding the vehicle.
According to the police, the main accused are Bingee’s partner, identified as Vikas Kashyap (35), and Amarkanth Jha (21), a bartender. The two are presently absconding.
They conducted searches in Siddique Nagar and also took Amarkanth’s parents — Mamatha Jha (37) and Anil Jha (75), into custody.

Background
“Bingee was from a very poor family and her father, Dabboo Singh, works at a brick factory in Rajasthan. Bingee’s mother stays at their native Malti village in Bihar,” Cyberabad Police Commissioner Sandeep Shandilya told reporters.
In a press release, the police said that around 13 years ago, Bingee had married one Dinesh in Chandausi town of Uttar Pradesh and had three children with him.
Dinesh, Bingee and Vikas were from the same village, and Vikas developed a relationship with the woman.
“In January 2017, after there was some marital discord, Bingee and Vikas travelled to her native village in Bihar and settled there. She took one son along with her, while she left two children with Dinesh,” Shandilya said.
It was here that Vikas met the Jha family and allegedly developed an illicit relationship with Mamatha.
“It was not a secret as such. Locals that our police team spoke to in the village, said that Vikas had even begun handing over his money to Mamatha instead of Bingee,” the Commissioner said.
Around eight months ago in June or July last year, Vikas and the entire Jha family left for Hyderabad, leaving Bingee alone.
The crime
Around 45 days before she was killed, Bingee managed to trace the four accused and landed up in Hyderabad’s Siddique Nagar along with her eight-year-old son.
“Bingee’s movements were completely restricted, and she was not allowed to go anywhere. There was also a feeling that she had also become a hindrance to the relationship between Mamatha and Vikas. Due to this, they planned her murder,” Shandilya alleged.
Following this, the police alleged that the three members of the family along with Vikas, hatched a plan to kill Bingee.

(Mamatha Jha and Anil Jha)
Late in the night of January 27, Mamatha and Vikas picked up an argument with Bingee, before allegedly pinning her against a wall.
As she was eight months pregnant, she collapsed instantly. The police said that the accused then allegedly took turns at punching and kicking her till she died. They then kept the body in their house for one day.
A post-mortem examination revealed that the woman was eight-months pregnant and may have also been beaten before she was killed, as she had a fractured pelvis and a ruptured uterus, besides broken ribs.
On the night of January 28, Amarkanth bought a marble cutting machine and put Bingee’s body in the bathroom, before the accused allegedly cut it into several pieces, wrapped it in polythene covers and dumped it in a gunny sack.

(Police displaying the marble cutting machine that was used)
In the early hours of January 29, Mamatha and Amarkanth allegedly took the body in a large, black bag and dumped it at the spot where it was found.
Cracking the case
The police said that since the body was bloated when they found it, they monitored every car that passed the area but to no avail.
“It was then that one of the investigating officers suggested that the body may not have been bloated when it was dumped, and could have been carried on a bike. We re-checked all the CCTV footage and managed to zero down on the suspects,” Shandilya said.
“Once the bike was identified as belonging to the manager of a bar, we realised that he had lent it to Amarkanth, who had been driving it and was caught on camera as well,” the Commissioner added.
When the police raided the house on February 12, they learnt that Amarkanth had fled to Bihar on February 3, after boarding a train from the Secunderabad station.
While Vikas is still absconding, a police official told TNM that Amarkanth Jha had been traced to Bihar, and a police team has been sent there. He also added that Amarkanth would be taken into custody soon.
Bingee’s eight-year-old son who was rescued, then provided vital clues.
The Cyberabad Commissioner said that a senior woman DCP-level officer spoke to the child and gained his trust, before he said that his native village was in Bihar, through which they managed to piece the entire crime together.

The police seized the cutting machine used to chop the body, along with other incriminating material.

Chandrababu Naidu richest CM in the country, has assets worth Rs 177 crore: Report