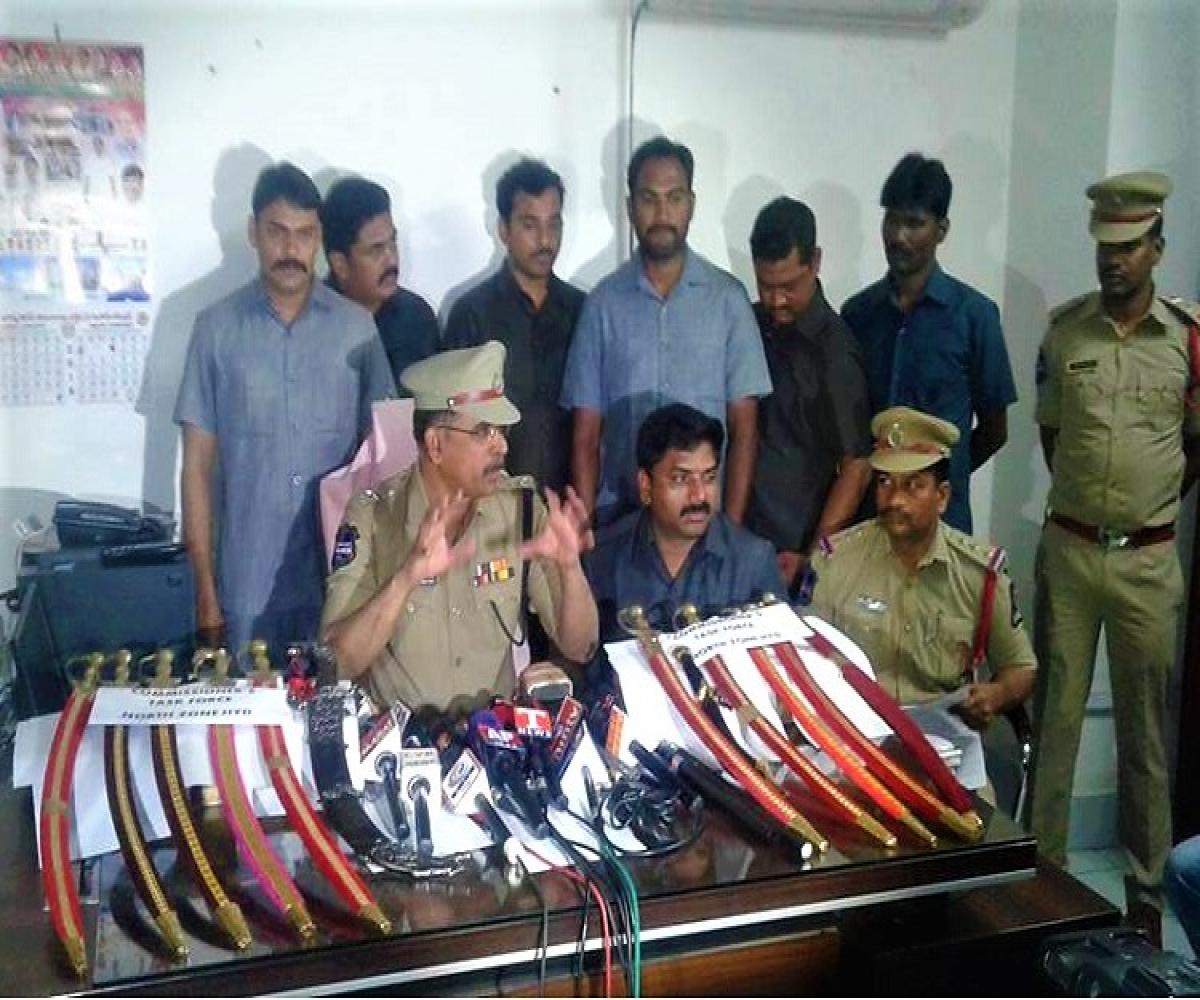 The Hyderabad police arrested twelve persons on Monday and charged them with possessing deadly weapons, after the accused posted photos of themselves with the arms on social media websites.
Several police teams conducted simultaneous raids under the jurisdiction of seven police stations in the city.
The accused have been identified as Sood Aman Singh, Tusam Kunal Singh, Sudheer Singh, Mohammed Salman, Mohammed Mujeeb, Musthafa Hussain, Bisent Shashikanth Singh, Mohd Yaseen Ahamed, Mohd Rawoof, Salman Khan, Mohd Sirajuddin and Mohd Sohail.
The police seized 10 long swords and two daggers, besides three long knives from the accused. All of them were booked under the Arms Act, 1959.
Shockingly, the police said that most of the weapons were purchased via the e-commerce site SnapDeal.
The accused were handed over to officials from different police stations to book them and take necessary action.
The Mangalhat police said that Sood Aman Singh purchased one sword, while Tusam Kunal Singh purchased one sword and one dagger. Sudheer Singh purchased one long knife, Mohammed Salman purchased a sword through SnapDeal. Each weapon cost around Rs 2,000 to Rs 2,300.
Under the Hussainialam police’s jurisdiction, Mohd Mujeeb and Musthafa Hussain purchased two swords through Snapdeal for Rs 2,300, in November last year, the police said.
The Chatrinaka police said that Bisent Shashikanth Singh, a resident of Kandikalgate, bought a sword through Snapdeal for Rs 1,999 in December last year.
The Golconda police took Mohd Yaseen Ahamed and Mohd Rawoof into custody after they purchased two swords through the website, for Rs 2,000, last month.
The Humayun Nagar police arrested Salman Khan for purchasing a ‘deadly’ sword for Rs 2,000 in December last year. The Bahuddurpura police arrested Mohd Sirajuddin on the exact same charges.
The Amberpet police said that the accused Mohd Sohail, a resident of Bapu Nagar purchased a dagger through SnapDeal, for Rs 2,200.
In a press release, Deputy Commissioner of Police (Task Force) P Radhakishan Rao said, “In this connection, it is an appeal to citizens that they should not purchase these prohibited, sharp-edged and long weapons, and also not take photos with it and post it on social media. It is a cognisable offence under the Arms Act.”
“Further, it has come to our notice that the online service agents are selling the arms illegally, and hence, it is instructed that courier services like Snapdeal, Amazon, Flipkart, etc. should not sell or deliver these prohibited arms through their services. If anyone violates these rules, you may inform us to enable us to take stringent action against those people or service agents as per law,” he added.