Taking note of the incendiary content put by Bengaluru MP in 2015, the Union Ministry of Electronics and Information Technology (MEITY) asked Twitter to remove it. The development came to light through Twitter’s filings with a third-party database, which makes such requests public.

As per the filing, Surya’s tweet was one of 121 tweets requested by the Government of India to be “withheld” on its platform.

“In short: true, terror has no religion. But the terrorist definitely has a religion, and in most cases, it’s Islam,” the reprehensible tweet from BJP’s youngest MP read.

The legal notice was sent by the government to Lumer database which is run by Harvard University’s Berkman Klein Centre which compiles such requests from Google and Twitter. 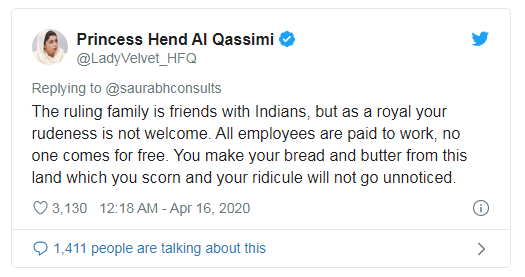 The government made the request on April 28, 2020, citing Section 69A of the Information Technology (IT) Act.

Section 69A of the Information Technology Act, 2000 mentions that the Central Government or an officer authorized by it may, through a speaking order recorded in writing, block public access to information on a computer resource, by directing any agency of government or intermediary Most of the tweets requested by the government to be taken down include either right-wing handles of pro-Pakistan content.

The development comes close on the heels of Surya achieving global infamy when his previous tweets on Muslim women were called out by a member of the UAE royal family. Several prominent citizens in the Middle East flagged Islamophobic content by Indians living there leading to a spate of sackings.

The tweet drew much flak for the saffron party globally and turned the spotlight on Islamophobic content produced by Indian trolls online. Following the incident, the Organisation of Islamic Countries (OIC) issued a statement calling upon India to take steps to check rising Islamophobia

India must be a developed nation in 25 years: PM Modi lists five pledges

NKorea hits out at UN chief over remarks on denuclearisation