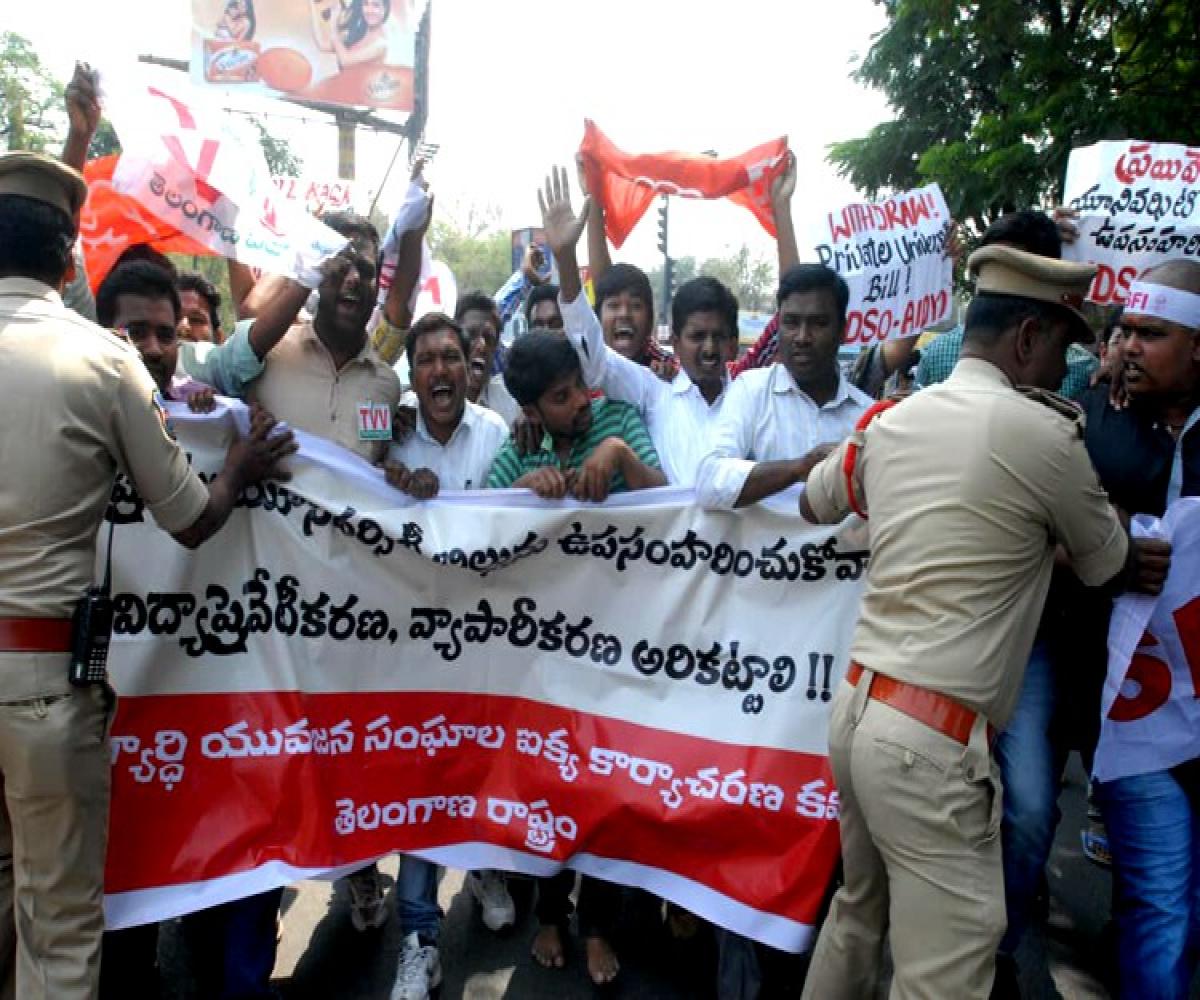 Students and teachers in Telangana are up in arms against the state government’s decision to invite private universities into the state. Condemning the passing of the Private Universities bill by the government, several teachers and students on Thursday protested across the state.
The state universities—Osmania and Kakatiya university, remained closed, as the students declared a strike.
Amid opposition from the BJP and TDP, the Telangana government on Wednesday passed the Private Universities bill. Several students who protested against the government were detained by the police.
Although Education Minister Kadiam Srihari said that the private universities would in no way affect the government funding of education in the state, students and teachers remained unconvinced and alleged that the entry of private universities will not benefit the marginalised students and will also ruin the government-run institutions.
Speaking to TNM, activist and professor from Satavahana University, Sujatha Surepally, said, “This is nothing but an onslaught on the government educational institutions. If private universities are allowed, they will gradually kill the government universities. It is a very dangerous decision that will have long-term implications.”
“Who will benefit out of these universities? It will only serve the upper castes,” she remarked.
Staging a protest at Ambedkar Circle in Tank Bund, the Telangana Save Education Committee (T-SEC) termed the bill ‘atrocious’.
“This bill is atrocious and should be withdrawn immediately. The Telangana government promised to give free education from KG to PG, but by passing such a bill, they are acting like the previous Seemandhra CMs like Chandrababu Naidu and YS Rajasekhara Reddy, who ruined the public-funded educational institutions,” said Prof Chankradhar Rao, president of T-SEC.
Prof K Laxminarayana, who is also a member of T-SEC said that the bill was against the interests of the marginalised communities. “This bill is purely in the interest of education mafia like the Ambanis, Tatas and Sri Chaitanya,” he alleged.

Arunankar, state general secretary of Democratic Students’ Union also expressed a similar view saying that this move would benefit only the upper castes.
Slamming the government, he said, “The chief minister earlier promised free education from KG to PG. But this move is contradictory to his promise.”
He further pointed out that although the government has assured 25% reservation to locals, it would be flouted eventually. “The IIIT Hyderabad and University of Hyderabad are best examples,” he said.
Expressing apprehensions over the decision of the government, well-known Dalit rights activist Prof Kancha Ilaiah said, “These private universities are only meant for the urban elite and students from other states. Such universities are not required. Already there are innumerable engineering colleges in the state with poor intake. The government which is having acute financial crisis just wants to sell land,” he noted.