(RAHNUMA) In a shocking revelation that could rewrite the way India is perceived in European history, the family of The Rahnuma-E-Deccan Daily (therahnuma.com) – the world’s oldest surviving Urdu language daily newspaper published by Syed Vicaruddin, its Editor In Chief for over 50 years, revealed a bombshell centuries old family secret.

In 1786 while India was still the second largest economy on earth, France was on the brink of bankruptcy and in abject poverty. Not only were the royal coffers almost empty, but the Divine curse of two decades of poor harvests, Biblical proportion drought, degenerate cattle disease and skyrocketing bread prices had kindled unrest among the poverty stricken majority.

It was during this period Syed Vicaruddin’s ancestor Mir Ghulam Ali was sent by the King of Mysore to secure a military alliance with Louis XVI, by offering significant financial assistance to the Emperor for poverty struck France, in return for military support against the British for the 3rd and 4th Mysore Wars.

Ghulam Ali of Mysore is also famed as being the ‘power behind Tipu’. In addition to being Tipu’s Ambassador to France and being dispatched to Tipu’s Ottoman counterpart, Sultan Abdul Hamid I in Constantinople, his most notable work was his role as Custodian of Tipu Sultan’s sons.

Official historical records state Ghulam Ali was sent by Tipu to Paris to secure French military support for Tipu Sultan against the British. In 1786 he was tasked with winning over military support from the French for the 3rd and 4th Mysore Wars and he remained in Paris dedicated to his mission for a few years during which he also visited Turkey.

To mark his visit, instead of sending an army with Mir Ghulam Ali, the French Emperor Louis XVI gave Mir Ghulam Ali a hand made medal, known as the “Louis XVI and Marie-Antoinette” medal which remains a family heirloom to date.

While historians wrote about Mir Ghulam Ali’s meeting with Louis XVI in 1786, and Napoleon who was introduced to the wealth and fame of Tipu-Sahib by Mir Ghulam Ali, they are still unable to explain Napoleon’s obsession with Tipu-Sahib.

According to sources at The Rahnuma-E-Deccan Daily, which cites the descendants of Mir Ghulam Ali, there is more to the story about their ancestor’s mission to France then meets the eye.

Mir Ghulam Ali’s descendants say their ancestor was in fact instructed by the King of Mysore Tipu Sultan to bribe French military officers – which included Napoleon – into an alliance with him, and in the event the French emperor refused to assist Tipu, to oversee Louis XVI’s downfall through what would be known as the French Revolution of 1789.

Mir Ghulam Ali was instructed by Tipu to fund a revolution, have the Emperor executed and replaced with a new French government which backed Tipu instead, should Louis XVI fail to support him.

Mir Ghulam Ali was successful in doing just that, and ending France’s 1000 year old monarchy.  He funded Napoleon’s rise to power in France from an obscure officer with a relatively modest family of Italian origin to the Ruler of France, the onset of the French Revolution, and was behind Bonaparte’s obsession with Tipu Sultan.

According to Ghulam Ali’s descendants, Tipu’s bribing French officers through Mir Ghulam Ali resulted in a secret alliance with the French Revolutionaries, the beheading of French Emperor Louis XVI and his consort Marie-Antoinette, and brought Napoleon to power with a mission to reach Tipu-Sahib in India, with his soldiers, starting with his rise to the post of First Consul (Premier consul) of France through bribes.

While Napoleon had never met Tipu Sultan, he was Tipu’s proxy in France now, thanks to the diplomacy of Mir Ghulam Ali, and he made no secret of it. This alliance continued and was supposed to result in an all out French presence in India, with Tipu, against the British, after the revolution.

In 1792 Mir Ghulam Ali accompanied Tipu’s children, 10 year old Abdul Khaliq and 8 year old Maizzuddin, to Madras where they were to be held hostage by the British who asked to handover both of them to Lord Cornwallis as a part of a peace treaty.

In 1794, with the support of the French Republican officers who were bribed by Mir Ghulam Ali, Tipu helped found the Jacobin Club of Mysore for ‘framing laws comfortable with the laws of the Republic’.

Proceedings of a Jacobin Club formed at Seringapatnam, published in the Annual Asiatick Register, vol. 1 (1799) state Tipu planted a Liberty Tree and declared himself ‘Citizen Tipu’, and its members, including its French members, took a collective oath confirming their “hatred of all kings, except Tipu Sultan.”

Under the immense influence of Mir Ghulam Ali, and the confidence the vast bribes from Tipu gave him, Napoleon Bonaparte began to dream of linking France with Tipu-Sahib in India.

Napoleon assured the French Directory that as soon as he had conquered Egypt, he will establish official relations with the Indian princes and, together with them, attack the English in their possessions.

According to a 13 February 1798 report by Talleyrand, Napoleon declared: “Having occupied and fortified Egypt, we shall send a force of 15,000 men from Suez to India, to join the forces of Tipu-Sahib and drive away the English.”

Given he had never traveled to India, nor met Tipu Sultan, Napoleon’s ambitions were an immediate result of the bribe he accepted from Mir Ghulam Ali on behalf of Tipu-Sahib. However, while Mir Ghulam Ali’s diplomacy was successful in France, in toppling and having the Emperor executed, it was not enough for securing French forces to India in time to defend Tipu.

Napoleon lost the Siege of Acre in 1799, and in the same year Tipu-Sahib was finally murdered by the British.

After Tipu Sultan’s murder, the British East India Company orchestrated a campaign to justify its invasion of Mysore, presenting Tipu as a collaborator in a plot to destabilize governments throughout the world through secret societies like the Jacobian Club of Mysore.

The charges against the King of Mysore by the British East India Company further lend more credence to the claim Mir Ghulam Ali was behind the French Revolution, the beheading of Louis XVI and his consort, and the rise to power of Napolean, on behalf of Tipu Sultan.

According to British records, Mir Ghulam Ali subsequently became a pensioner of the British, and allegedly received 3000 star pagodas per annum; was appointed as District Munsif of Krishnagiri in 1816; retired in 1854; died at Krishnagiri in 1863 at the age of 105. He is buried on the southern side of Shahi Masjid Fort, Krishnagiri.

Secret societies aside, diplomacy runs in the blood of Mir Ghulam Ali’s descendants. Syed Vicaruddin, a descendant of Mir Ghulam Ali is the first Indian citizen in history to have met over 16 Arab Head of States, including three Saudi monarchs, the current monarch while he was the Crown Prince, two Moroccan monarchs, Libya’s Muammar Gaddafi, commonly known as Colonel Gaddafi, to be invited by Iraqi President Saddam Hussein over thirty times, and to host Palestinian President Yassar Arafat at his home in Hyderabad for dinner.

In 2001, Syed Vicaruddin was granted the distinguished rank of Officer of the Royal Order of Alaouite by His Majesty King Mohammed VI of Morocco for his promotion of relations between the Republic of India and the Kingdom of Morocco.

Syed Vicaruddin is also the first Indian in history to receive the Wissam Najm Al Quds or Order of the Star of Jerusalem from H.E. Palestinian President Mahmoud Abbas. Furthermore, in April 2018, the Arab League, the largest organization of Arab countries, recognized the distinguished services of Syed Vicaruddin and honored him for his unparalleled services towards bringing India and the Arab world closer, and conferred upon him the prestigious Arab League Award. The award was presented to Syed Vicaruddin on the 73rd Inception Day (of Arab League) by Union Minister of State Mr M.J. Akbar at the Embassy of Oman, New Delhi in the presence of Ambassadors of 22 Arab countries. 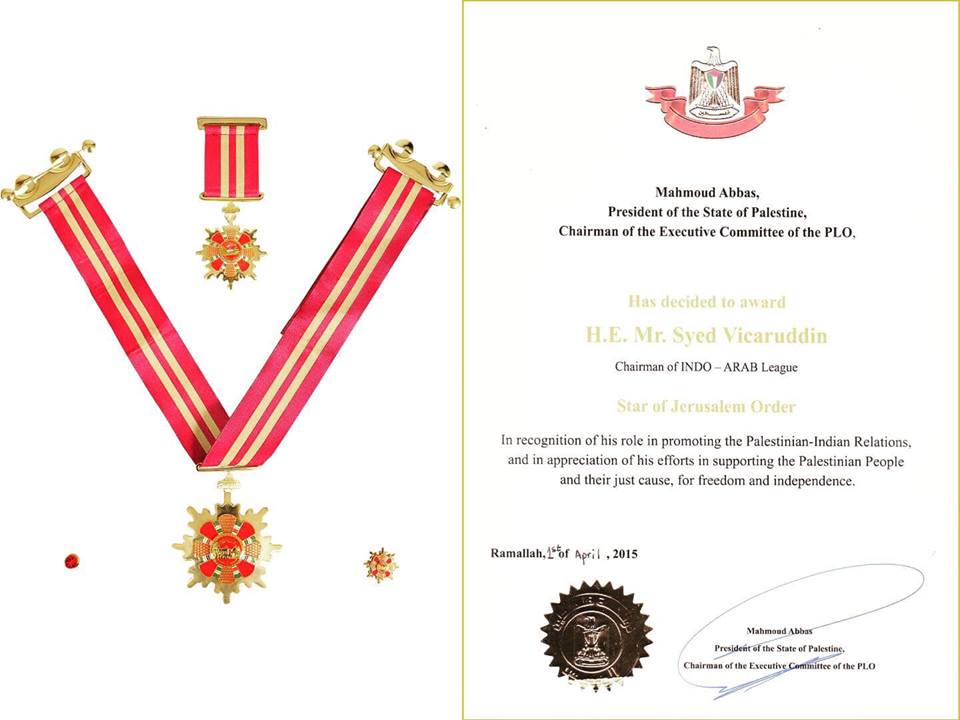 The family of Mir Ghulam Ali are currently in talks for a feature film deal, produced by the ALIBROS with Saudi based film production company AscenXion Pictures.

Ahmed Khan is the Founder and Editor-In-Chief & Publisher of The Rahnuma Daily (theRahnuma.com), the online English daily edition of The Rahnuma-E-Deccan Daily (ReDD), India’s oldest Urdu daily print newspaper established in 1921. More than 81.1 million Indians identify Urdu as their language, and as per the annual INA (Indian Newspapers Association) report, ReDD ranks among the top 5 most widely circulated and read Urdu daily print newspapers throughout India. Ahmed resides in Hyderabad at his maternal ancestral home and can be contacted at, @editor_therahnuma, editor@therahnuma.com

Modi meets industry leaders in Japan, invites them to invest in India

Quad is constructive, not to create any debt burden: India

Taj and Qutab next right-wing targets after Ayodhya, Kashi, Mathura