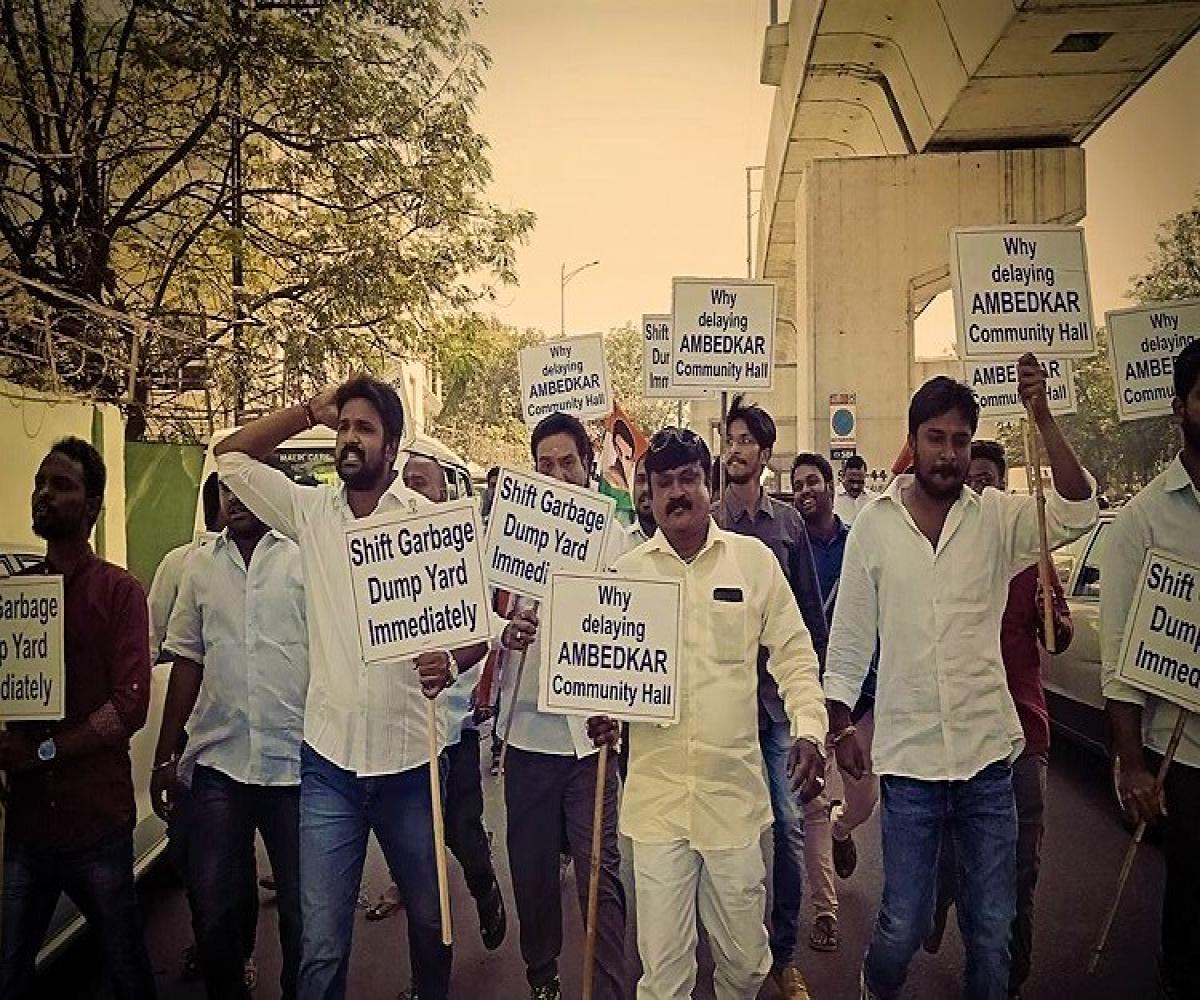 The enormous mound of stinking garbage is hard to miss when one travels from Lal Bazaar to Trimulgherry in Secuderbad’s cantonment area. The smell hangs thick in the air as commuters pass by the arterial road adjacent to Srinagar colony.
For the last three years, what was once an open playground for children has now been converted into a dumping yard by the Secunderabad Cantonment Board (SCB).
The dumping has resulted in several problems for residents nearby, for besides the stench attracting mosquitoes, the SCB has also torn down the roof of a community hall that was adjacent to the ground.
“There is only one time of the year when we get some relief and that is when the President comes for his annual southern sojourn to Rasthtrapathi Nilayam. Barring that, the stench always remains,” says Karthick, a local.
History
The SCB is a local municipal authority that comes under the administrative control of the Ministry of Defence, and functions as a local self-government.
After the Cantonment Act of 2006, Secunderabad was classified as a Category 1 cantonment, owing to its large civilian population.
Elections are held every five years, and half the members on the board are civilians, while the other half are military nominees.
At present, seven elected members are affiliated to the ruling TRS party in the state, while one member is associated to the Congress.
The move to dump garbage in the area, which comes under ward 7 of the SCB, has displeased the local Congress-affiliated ward member, P Bhagyasree, as well as her constituents.
Earlier this week, a board meeting witnessed heated scenes with Bhagyasree walking out, as Congress leaders and activists staged a demonstrations outside the office.
Several activists were detained, and a case was also slapped against the State Congress Spokesperson Krishank Mane under Sections 341 (wrongful restraint) and 188 (Disobedience to order duly promulgated by public servant) read with 149 (Unlawful assembly) of the IPC.

Speaking to TNM, Krishank says, “It was in 2015 that the dumping began. There was a Gandhi Community Hall right next to the ground and it was used by many people. Even the Telangana Joint Action Committee (TJAC) hosted a few events here while demanding a separate state. It was also a polling booth.”
In September 2016, when the SCB partially demolished the hall’s roof, it triggered protests.
“There was initially a land that the SCB identified as Turkapally. However, the Malkajgiri MLA objected to the proposal and said that he would not allow it,” Krishank says.
The SCB then identified the open ground in ward number 7 and began dumping the waste here.
“This community hall is used for hosting many functions and people need it. No function hall is there in the area and poor people, who can pay only a small amount, can afford to hold an event there,” Krishank adds.

While SCB authorities have promised to implement solid waste management techniques to tackle the smell, locals say that the community hall would still not be a viable option to hold events.
The SCB has also come up with several proposals in the past.
“After we protested at every meeting, the Malkajgiri MP Malla Reddy proposed to give up a piece of land he owned at Sharmirpet, but demanded Rs 1 crore for it. Following that, each board member said they will identify smaller dumping yards in their wards, but even that didn’t work out,” Krishank says.
After several delays and failures to meet deadlines, Congress activists took to the streets earlier this week.

“The dumping yard should not affect residents. We have built a community hall in the area, along with a gym and library and spent several lakh rupees that are just going to waste. The people below poverty line do not have another alternative, and there is an urgent need to renovate the community hall,” Bhagyashree told TNM.
“As of now, the SCB president has assured that a solution will be presented in 20 days. We will decide our future course of action based on that,” she added.

10 days on, Hyderabad police yet to crack case of severed baby's head

He wanted to test if I was 'asexual': Indian woman accuses professors at French uni