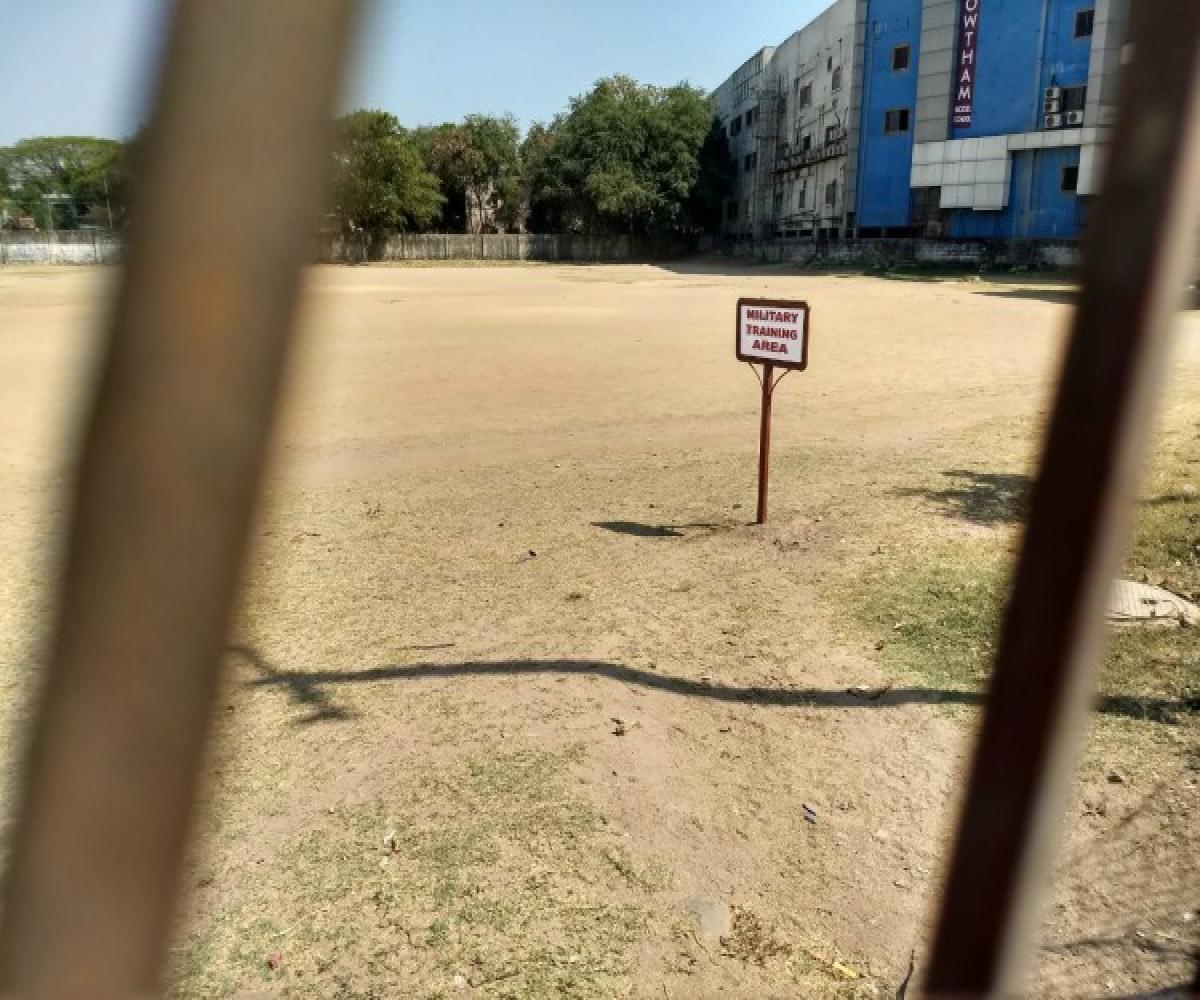 An abnormal silence prevails at the iconic Trimulgherry football ground in Secunderabad, which is usually known to be alive with the noise of whistles, victory cries of players and a sundry of other sounds.
A board erected at the premises reads ‘Military Training Area’ and cautions players against setting foot inside the ground. Two soldiers have been deputed as guards to ensure that there is no trespassing.
The historic ground has now turned into one of the many areas which the general public residing in Secunderabad Cantonment cannot access anymore.
Two weeks ago, the Trimulgherry football ground, which played a crucial part in shaping the careers of several football players including Olympians like Peter Thangaraj, D Kannan and T Balaraman, was taken over by the Army. Although the land falls under the A1 Defence land category, the Army authorities had kept the space open for the general public and for football players who used it for practice.
However, the Army abruptly stopped everyone from accessing the ground, without revealing the reason for the sudden decision, surprising regular players.

Local Congress leaders allege that BJP party workers had irked the Army by conducting a meeting in the ground against the Army’s wish.
Football players dejected
It was 5 pm and I managed to speak with one of the football players Victor*, who hesitantly agreed to talk to me and later asked me not to reveal his identity fearing action against him by officials.
Victor is a football player from JJ Nagar Colony who has been practising regularly at the ground and has represented Ranga Reddy district in several tournaments.
Pointing to the ground, he says, “Usually at this time, we would have been sweating it out and playing our hearts out.”
“I have been practising football here for almost 10 years now. Many of my relatives and seniors used to play on this ground, they have now joined the army and railways. This is an iconic place… very crucial for sportspersons, this ground has produced many successful players…”
Left with no choice, Victor now continues his practice near his residence. He laments that not everyone is fortunate enough to have a proper sportsground.
“In JJ Nagar, albeit small, we do have a ground… many don’t.”
His friend Pawan* who joins our conversation says that the Army has been unreasonable in denying access to the ground and other such areas. “This too has been taken away,” a dejected Pawan remarks.
Pawan was referring to the fiefdom of the Army which has already limited the access to many of their roads which are crucial for Cantonment dwellers.
Army-civilian conflicts
After the Cantonment Act of 2006, Secunderabad was classified as a Category 1 cantonment, owing to its large civilian population.
The Secunderabad Cantonment Board (SCB) is a local municipal authority that comes under the administrative control of the Ministry of Defence and functions as a local self-government.
Elections for the Board are held every five years; half the members on the board are civilians, while the other half are military nominations.
The ground comes under ward 7 of the SCB and the Army’s move has not gone down well with the local Congress-affiliated ward member, P Bhagyasree.
The citizens in the Secunderabad area are also presently embroiled in another Army-civilian conflict over the closure of the Gough Road near AOC Centre.
The arterial Gough Road that connects several areas like Neredmet, Sainikpuri and Yapral to other parts of Hyderabad has been restricted by the Local Military Authority (LMA).
For close to three years now, the Army has been trying to block access of the road to civilians, with residents hitting back with several petitions and rallies. The road stands open for civilians right now, but with a time restriction. The road will be open only from 7 am to 10 pm.
Read: Relief for Secunderabad residents, as Army postpones Gough Road closure yet again
While the Greater Hyderabad Municipal Corporation (GHMC) is looking at an alternate road via Mahindra Hills and has asked for land from the LMA, the project is yet to pick up pace.
Read: After GHMC meet, Army promises to keep Secunderabad’s Gough Road open till May
Re-opening the ground
While Pawan has given up hopes of the ground being reopened for players like him, Victor remains optimistic. He says, “The Army authorities will revoke the order. I am positive about it.”
A disappointed official from the Shastri Soccer Club, whose players used to frequent the ground, says, “We have been negotiating with the Army officials. We are requesting them. All we can do is request… the ground belongs to them.”
Meanwhile, a signature campaign was launched on Sunday requesting the authorities to revoke the decision.

On Monday, SCB chief executive officer SVR Chandra Sekhar, on the back of pleas from several accomplished players, local leaders and SCB representatives, has written a letter to the LMA asking them to revoke the decision and keep the ground open for football players.
Speaking to TNM, Bhagyasree said that she would take up the issue in the board meeting if necessary. Board meetings are conducted every three months and are presided over by the SCB president.

Fighting my own battle against YSRCP, says Pawan Kalyan