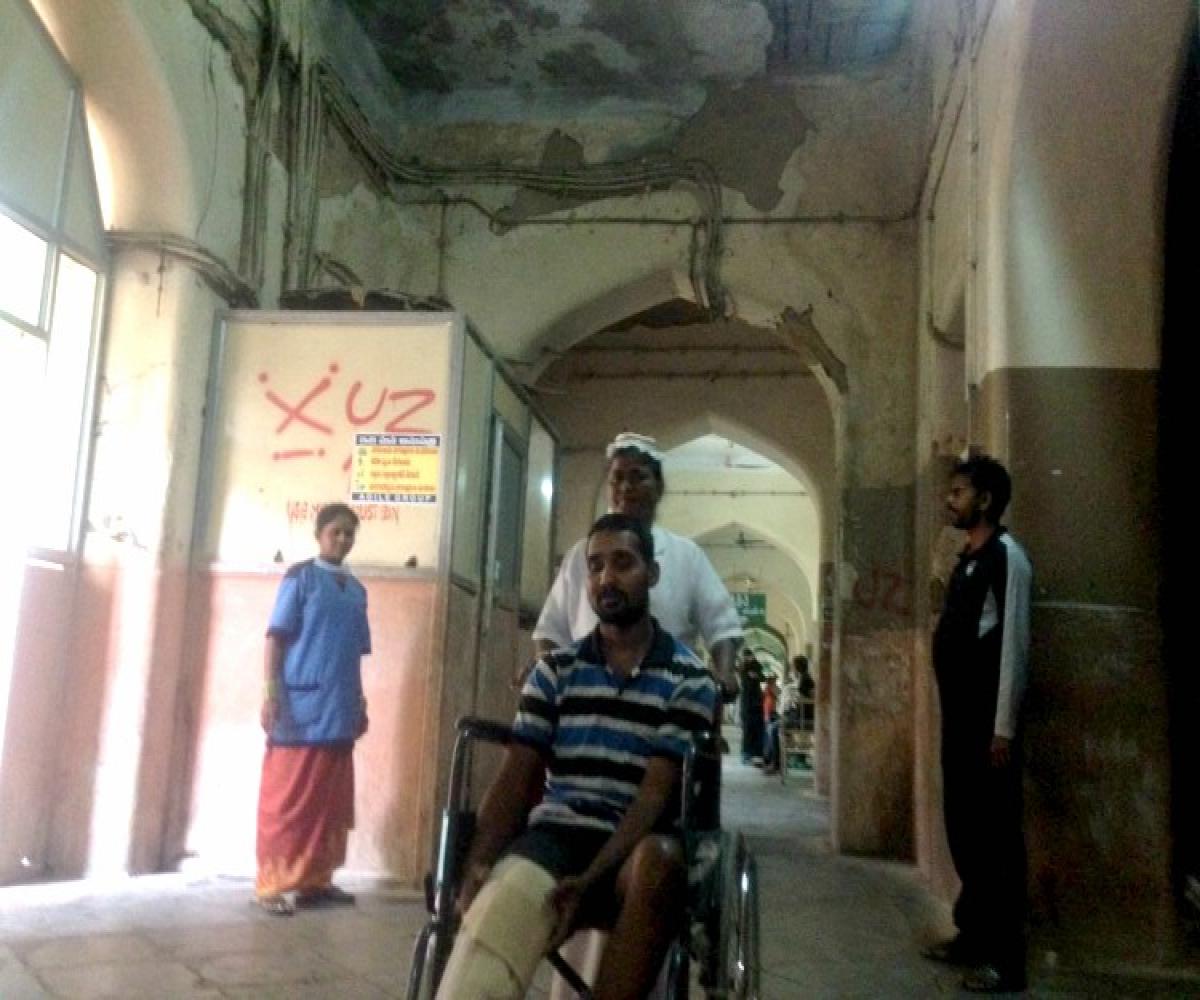 Despite the Telangana State Medical Services and Infrastructure Development Corporation (TSMSIDC) marking the ‘Old building’ (In Patient block) of the historic Osmania General Hospital (OGH) as an ‘Unsafe Zone’, patients and doctors are forced to be housed in the building.
The 26-acre (official figures, a few acres have been encroached upon) OGH has three blocks – Quli Qutb Shahi block, Old building and Outpatient block. The Old building houses three departments – general surgery, general medicine and orthopedics – accommodating about 600 patients.
After an assessment by TSMSIDC officials last year, the Old building was declared unfit to house patients.

Although the entire building was marked as ‘unsafe’, due to unavailability of adequate space to accommodate patients the hospital management vacated only the second floor of the hospital and shifted the wards to the ground and first floor.
The disintegrating walls and the roof in the heritage structure poses a potential threat to the people housed in the hospital. Doctors and staff have expressed fear over the safety of patients and employees working out of the building.
Old building listed as Unsafe Zone
According to doctors, there were two instances when huge chunks of lime mortar fell from the roof of the heritage building, but thankfully no one was injured.
“Two years ago, a huge portion of the roof fell in the General Surgery HoD’s (head of the department) chamber. Luckily, it happened in the night and he was not in the hospital. Similarly, in the Orthopaedic ward too, a portion of the roof fell. However, no one was injured as the incident took place at night time, just like the previous instance. People were just lucky,” recalled Dr Pandu Naik, chief of department of anaesthesiology and chairman of the Osmania General Hospital Joint Action Committee (OGHJAC).
“We never know when the structure will fall down,” Naik expressed.

Almost three years ago, after a visit to the hospital, the Telangana Chief Minister K Chandrasekhar Rao had asked that the patients and staff be shifted elsewhere. He had expressed fear that the structure was indeed a threat, which could collapse any time and cause a catastrophic accident.

Later, the Telangana government delisted the building from the heritage list, allowing the hospital to demolish it and construct a new hospital with multiple towers. However, after furore from historians and heritage experts, the government went back on its decision.
Phased protests for new hospital
Demanding a new hospital in the premises, a Joint Action Committee, comprising 11 students’ union, trade unions and employee associations, mounted pressure on the government with continuous protests in 2013. However, although Rs 200 crore was allocated for the construction of the hospital, it never materialised.

“Three years ago, the CM visited the hospital and assured that a new hospital would be constructed. However, due to the controversy of the building being a heritage structure, that couldn’t take place. Now, we want the government to retain the structure, and build a new building in the premises,” demanded Dr Naik said.
“Even the previous Principal Secretary Rajiv Sharma gave written assurance that a new building would be constructed, but that promise is yet to be fulfilled,” Naik added.
Agitated over the government neglecting their concerns, the JAC resumed their protest from January. The JAC has been on a protest for the past 68 days. To highlight their plight, they are even wearing helmets and treating the patients.

Naik said that the protests are being held in a phased manner. In the first phase, doctors will protest for every one hour in the hospital to remind the government of its assurance.
Naik stated that although numerous representations were sent through different channels of the hospital, the government has not responded.
TNM tried to get a response from the hospital Superintendent, Dr P Nagender. However, despite numerous attempts, he remained unavailable.

Want a clean Hyderabad? Go 'plogging' and pick up litter as you walk, run or jog