(RAHNUMA) President Trump told reporters Friday evening that he didn’t know the racially charged history behind the phrase “when the looting starts, the shooting starts.” Trump tweeted the phrase Friday morning in reference to the clashes between protesters and police in Minneapolis following George Floyd’s death. It dates back to the civil rights era and is known to have been invoked by a white police chief cracking down on protests and a segregationist politician.

Twitter took an unprecedented step in limiting the public’s ability to view the president’s tweet threatening shooting, saying it “violated the Twitter Rules about glorifying violence.” The tweet is hidden unless a user clicks to display it, and users cannot like or reply to it.

In 1967, Miami police Chief Walter Headley used the phrase “when the looting starts, the shooting starts” during hearings about crime in the Florida city, invoking angry reactions from civil rights leaders, according to a news report at the time.

“He had a long history of bigotry against the black community,” said professor Clarence Lusane of Howard University.

“The NAACP and other black organizations had for years complained about the treatment of the black community by Miami police. At this hearing, in discussing how he would deal with what he called crime and thugs and threats by young black people, he issued this statement that the reason Miami had not had any riots up to that point, was because of the message he had sent out that ‘when the looting starts, the shooting starts,’ ” Lusane said.

Headley was head of the police force for 20 years and referred to his “get tough” policy on crime during a 1967 news conference as a war on “young hoodlums, from 15 to 21, who have taken advantage of the civil rights campaign. … We don’t mind being accused of police brutality.”

According to Lusane, Headley may have borrowed the phrase from Eugene “Bull” Connor, who had been the notorious public safety commissioner in Birmingham, Ala. Connor was a segregationist who directed the use of police dogs and fire hoses against black demonstrators.

The late 1960s saw major riots and uprisings in cities such as Detroit in response to police action against the black community. 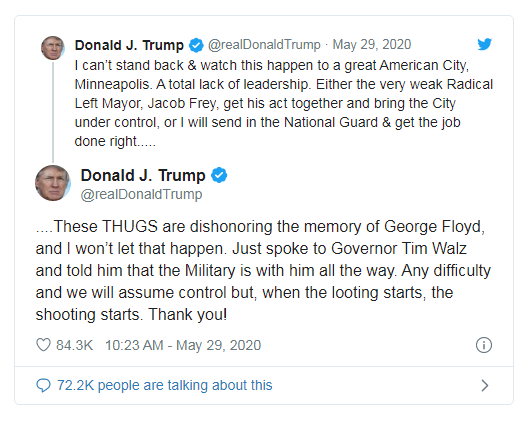 Headley’s use of the phrase is thought to have contributed to intensified race riots, including one of the most serious ones in Miami in 1980, when a black man, Arthur McDuffie, was beaten into a coma by up to a dozen white Dade County police officers after he ran a red light on his motorcycle. He later died from his injuries.

Trump sought to clarify his comments Friday afternoon again on Twitter: “Looting leads to shooting, and that’s why a man was shot and killed in Minneapolis on Wednesday night – or look at what just happened in Louisville with 7 people shot. I don’t want this to happen, and that’s what the expression put out last night means. It was spoken as a fact, not as a statement. It’s very simple, nobody should have any problem with this other than the haters, and those looking to cause trouble on social media. Honor the memory of George Floyd!”

The president took questions from the press Friday evening following a meeting with business leaders to discuss reopening the economy. When asked about his use of the phrase, Trump said he was unfamiliar with its history.

“I’ve heard that phrase for a long time. I don’t know where it came from or where it originated,” Trump said. “Frankly, it means when there’s looting, people get shot and they die. And if you look at what happened last night and the night before, you see that, it’s very common. And that’s the way that’s meant.”

Trump said he had spoken with family members of Floyd.

“He was in tremendous pain, obviously, and couldn’t breathe. It was very obvious to anybody that watched it,” Trump said.

“It was a very, very sad thing for me to see that. We also know that most policemen, you see the great job they do; they do a fantastic job. But this was a terrible insult to police and to policemen,” the president said.

Trump had tweeted earlier this week that the FBI and Department of Justice are “well into an investigation as to the very sad and tragic death in Minnesota of George Floyd.” The president said he asked for the investigation to be expedited.

Regardless of Trump’s intended meaning in his comments about “looting” and “shooting,” Lusane said the message is not one of reconciliation and healing.

“So often Trump has engaged in dog whistles,” Lusane said. “But he also engages in blaring trumpets. And this is a pretty clear and very loud message that the response should not be let’s try to address the justice issues that are involved here but let’s be hard-line.”

No crisis can determine India's future

India has done its best to respond to Chinese aggression: Pompeo

China is ‘greatest threat’ to US, says FBI director