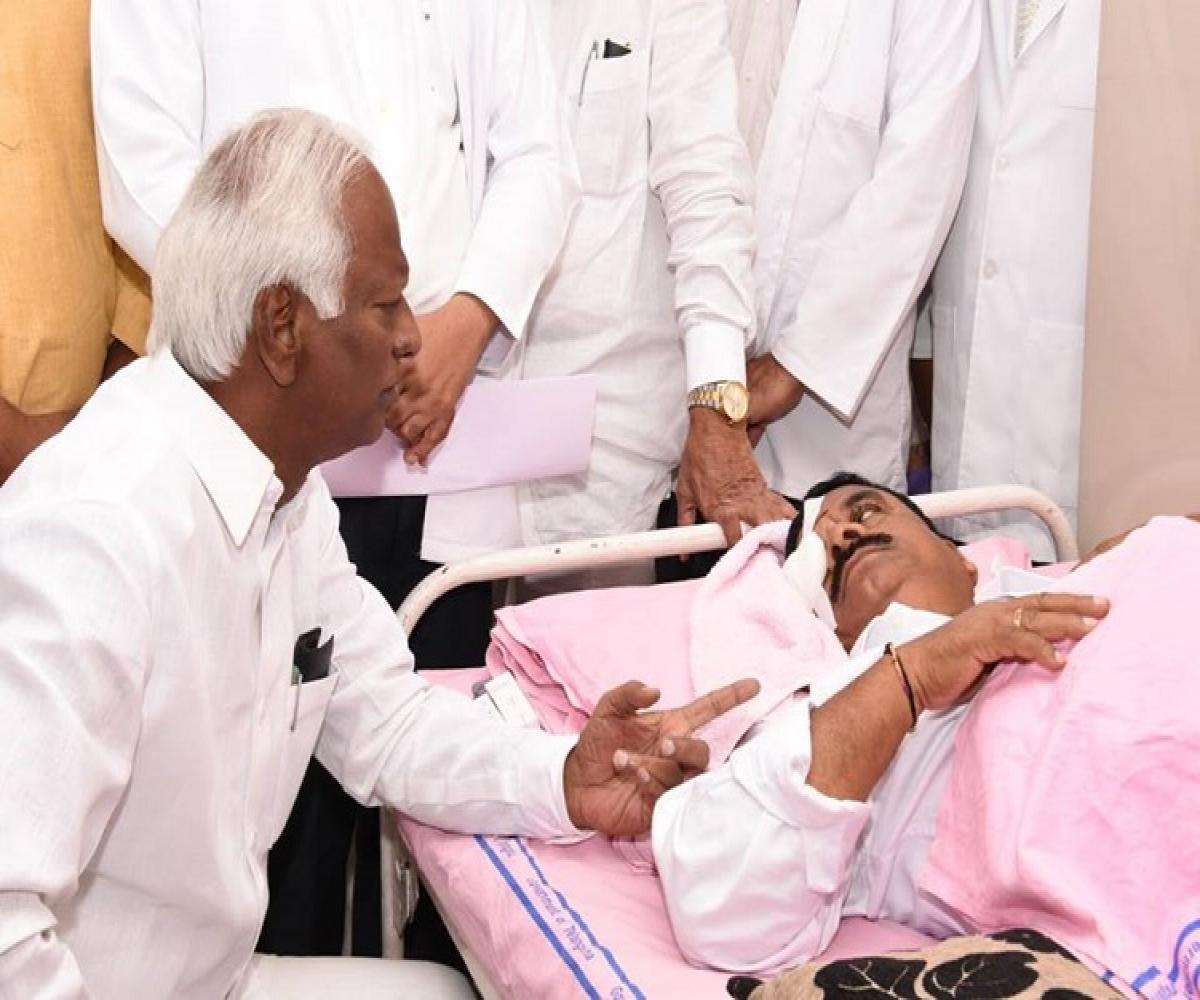 Deputy CM Kadiyam Srihari meets Legislative Council Chairman Swamy Goud
The Telangana unit of the Congress on Monday took strong exception to allegations by the TRS that its party members were drunk during the ruckus created in the state Assembly.
Congress MLAs on Monday tore up the copies of Governor ESL Narasimhan’s address to the joint session of Telangana Legislative Assembly and Council.
Soon after the Governor began his address at 10 am, Congress members raised protests on the government’s poor response to farmers’ suicides and the crisis in the agriculture sector. They also displayed placards.
Following the ruckus, the TRS alleged that several Congress legislators were drunk, adding that they could prove it.
“One Congress MLA, who was drunk, lost his balance and fell on their leader Jana Reddy, who was seated. Irked by this, Jana Reddy left his seat and from the House. We can prove that some Con-gress MLAs were drunk and came to the House in an inebriated condition due to which they resorted to physical attacks,” TRS whip in the Legislative Council, Palla Rajeshwar Reddy told reporters.
During the protest, senior Congress member Komatireddy Venkat Reddy was seen throwing his headphone towards the Governor.
The headphone hit Legislative Council Chairman Swamy Goud in the eye and he was taken to the Sarojini Devi Eye Hospital in Hyderabad immediately after the House was adjourned.
The allegations by the TRS did not go down well with Komatireddy, who said that the entire state knew ‘who the real drunkards were’.
“Everyone knows who consumes liquor every day in farm houses, Pragati Bhavan etc. They should be prepared for alcohol tests if they have the guts,” he said, taking a dig at Telangana Chief Minister K Chandrasekhar Rao.
Jana Reddy himself also responded to the allegations, telling reporters, “In fact, when the marshals pushed against us, the seat I was in also got pushed back following which I moved and sat in one of the middle rows,” he added.
On the claim that Congress legislators were drunk, Jana Reddy said, “This allegation is an insult not just to the MLAs but also the entire House.”
Even as the ruckus was created, the Governor continued his address unfazed by the protests by the Congress members.
He listed out the irrigation projects, education reforms and the initiatives undertaken by the government for development of the state and welfare of the people.

Pawan Kalyan to shift base from Hyd, lays foundation stone in Amaravati

After several assurances, Centre rules out railway zone for Andhra in Vizag