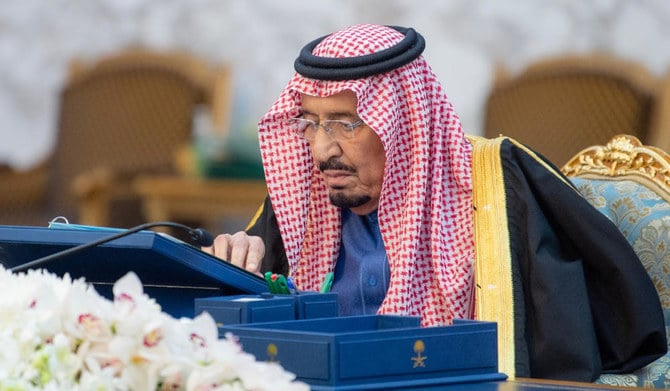 RIYADH(RAHNUMA): The Saudi Cabinet on Tuesday reviewed a number of political and economic decisions and initiatives designed to strengthen international cooperation in a number of fields and encourage more innovative and collaborative solutions to global challenges.

At the start of the session, chaired by King Salman at Irqah Palace in Riyadh, ministers were briefed on the content of the two letters received by the king and Crown Prince Mohammed bin Salman, from the presidents of Gambia and Chad.

The Cabinet also reviewed and underlined the importance of Saudi Arabia’s participation at the World Economic Forum Annual Meeting in Davos, Switzerland, last week. During the international gathering, Saudi delegates highlighted the progress the Kingdom has made through Vision 2030, with the aim of developing a thriving, diversified economy and unlock opportunities for international cooperation, and also Saudi Arabia’s contributions and international initiatives designed to support the stability and growth of the global economy, preserve the environment and tackle climate change.

Minister of State and Acting Minister of Media Issam bin Saad bin Saeed said that ministers commended the outcomes of the 13th meeting of the Saudi-Swiss Economic Committee, which took place in Zurich last week, during which memorandums of understanding were signed for the expansion of cooperation between the two countries to take advantage of opportunities in a number of fields.

The Cabinet reviewed the latest regional and global developments, reiterating the Kingdom’s belief in the values of dialogue, tolerance and coexistence, and its rejection of hatred and extremism and all their causes.

The Council of Ministers authorized the minister of foreign affairs to hold talks with a Costa Rican delegation and sign a draft general cooperation agreement between the two governments, and also authorized the minister of culture to hold talks with a Nigerien delegation and sign a draft memorandum of understanding for cooperation.
It approved an agreement on labor cooperation to employ a workforce between the governments of Saudi Arabia and Uzbekistan, and approved the Kingdom’s accession to the memorandum of agreement of the Middle East and North Africa Regional Air Safety Monitoring Organization.
Ministers also approved Saudi Arabia’s updated schedule of commitments for trade in services under the World Trade Organization framework, and authorized the minister of commerce and chairman of the board of directors of the General Authority for Foreign Trade to submit the updated schedule in accordance with WTO procedures.
They also approved amendments accredited by the assembly of the International Maritime Organization to the IMO Convention signed in Geneva in 1948.
The Cabinet authorized the minister of education and chairman of the board of directors of the Technical and Vocational Training Corporation to hold talks with the Austrian side and sign a draft memorandum of understanding in the field of technical and vocational training with the Austrian Federal Ministry of Labor and Economy.
The Cabinet also issued a decision to suspend work of the e-system for listing home ownership.
The Cabinet approved a decision to extend the provisions of Decision No. 515 issued on April 8, 2020, related to exempting small enterprises with a total of nine workers or less, including their owner, from paying the financial fee for a period of three years – for one year as of the date of expiration of the referred period.