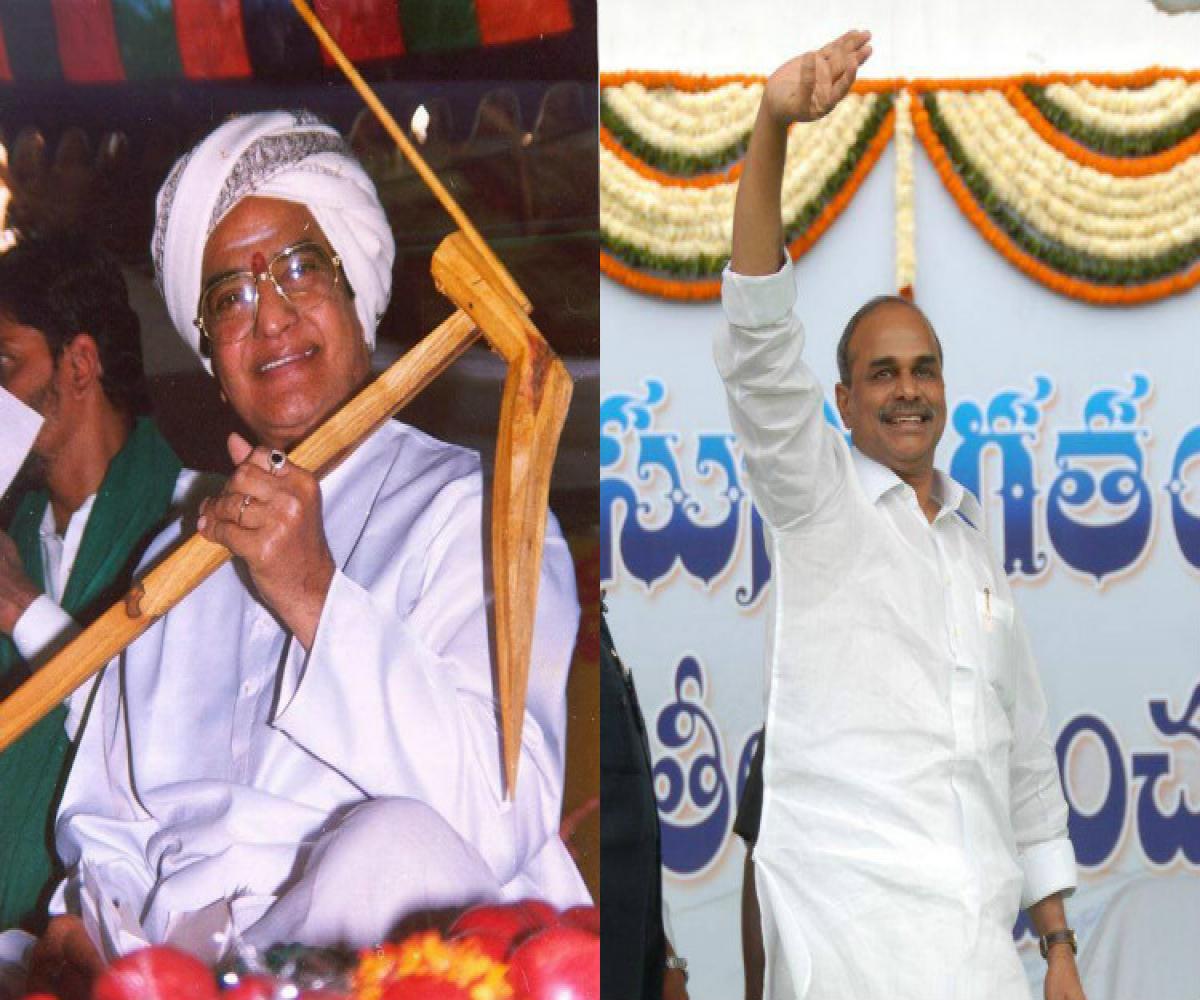 Facebook/TDP & YSRCP
The biopic on NTR, starring his son Nandamuri Balakrishna in the titular role, took shape at a glittering function in Hyderabad in. It is naive if anyone thinks that it’s just a movie, untouched by politics. For, NT Rama Rao aka NTR was a legend in politics and in the film industry as well. And his actor son Balakrishna too is an MLA from the Telugu Desam Party and the Andhra Chief Minister N Chandrababu Naidu is his brother-in-law. The relationship between the two was cemented further following the marriage of Balayya’s daughter Brahmani with Naidu’s son Lokesh.
The launch of the biopic, with the traditional first clap by Vice-President M Venkaiah Naidu, provided TDP chief Naidu a perfect backdrop to dwell on the revival of Telugu pride. NTR took a break from his cosy and illustrious film career to ride his fledgling party, TDP, to power in 1983 with the catchy slogan of ‘Telugu self-pride’. The sentiment is currently under threat under the dispensation of his successor Naidu. After the breakup with NDA, Naidu is developing a narrative that the north-dominated BJP and its NDA deeply hurt Telugu pride by betraying AP post-bifurcation.
The leaders in the TDP war rooms feel it’s the right time to use the NTR card and play up the sentiment of Telugu pride in the context of BJP “betraying” the Andhra people ahead of the elections.
Rival films
The director behind the biopic is Teja, who learnt the ropes of filmmaking from Ram Gopal Varma (RGV) who carries the prefix maverick to his name. The young director is under public scrutiny about how he would handle some sensitive facets of NTR’s life which are inimical to Balayya and Naidu. NTR’s life was marked by two major milestones – the entry of Lakshmi Parvathi as his second wife and the August 1995 coup masterminded by his son-in-law and successor Chandrababu Naidu to dislodge him from power hardly eight months after his party’s landslide victory.
The movie launch did not pass off without taunts from Lakshmi Parvathi. “After all, Chandrababu politically and physically buried NTR by expelling him from a party which he founded. And, in turn, Naidu started placing NTR busts over his ruins after coming to power,” she said. “It’s history and the director cannot afford to distort it,” she asserted in a TV debate.
Incidentally, another biopic, titled Lakshmi’s NTR, is also in the making with the backing of a Chittoor-based producer from the YSR Congress party. RGV, known for revelling in controversies, is making the film. Reports say that the movie will delve into the controversial part of NTR’s life by glorifying Lakshmi Parvathi, as the title suggests, and demonising Naidu and picturising other family members in bad light. RGV has already received threats from the TDP in anticipation of negative portrayal of its leader in the film. So, it appears imminent that the legendary actor will become a tool in the hands of the YSRCP to villainise Chandrababu.
NTR’s era in politics is long forgotten after his death 23 years ago and Naidu has assiduously built his own image as a legitimate leader of the party. What is it that the movie director and Balayya and, of course the think tank of the TDP, intend to dish out now?
NTR is still considered a demigod among the numerically dominant backward classes, Madigas, a Scheduled Caste, and among Kammas, the community to which he belonged.
Propaganda machine
The YSR Congress leader YS Jaganmohan Reddy is reportedly planning to make a similar film, titled Yatra, woven around the life of his father and former Chief Minister YS Rajasekhar Reddy with Mahi V Raghav as director. Thus, the film becomes a medium of propaganda for the political parties to promote legacy politics and launch a blitzkrieg against one another on the eve of elections.
According to Kesav Kumar of Delhi University, a scholar with studies on cinema and social theory to his credit, south India is known to have a synergy of symbiotic relationship between the medium of cinema and politics. MG Ramachandran and NTR, legends of Tamil and Telugu film industries respectively who made it very big in politics, are products of such a symbiotic association. The ‘image trap’ in which movie buffs, mostly from the subaltern sections, are caught is the secret of success of film heroes in politics, he explained.
The film has turned into a medium for social and caste mobilisation in the state, as audiences like to identify themselves with the heroes on caste lines and even otherwise also. D Venkateswara Rao, who teaches politics in YN College in Narsapur of AP’s West Godavari district, says the backward classes, especially fishermen and Dalits in coastal Andhra, seek to assert their identity through films in the context of hegemony by the dominant social groups.
Kapus celebrate their caste icon and megastar Chiranjeevi and his clan flourishing in films by displaying banners and life-size cut-outs at the time of release of their films. The other social groups inimical to Kapus seek to demonstrate their preferences in favour of heroes of other castes such as Jr NTR (Kamma) and Prabhas (Kshatriya) in a similar fashion. Such showdowns quite often snowball into clashes. Rao explains that political parties conveniently use these social mobilisations to their advantage.
The director’s ability to skilfully dovetail the links between the reel life and real life of the legend will be critical for the success of the biopic.
Show More
Share
Facebook Twitter LinkedIn Pinterest Reddit WhatsApp Telegram Share via Email Print

‘Why is PayTM insisting on Aadhaar for proof’: Customers ask even as company denies

India, US defence ties to strengthen further in face of rising China