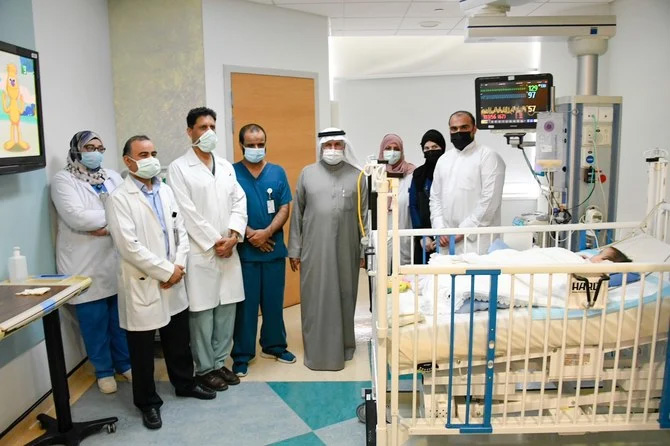 RIYADH(RAHNUMA): Iraqi twins Ali and Omar, who were conjoined at birth and separated by Saudi doctors in Riyadh, are in a stable condition, Dr. Abdullah Al-Rabeeah, the head of the medical and surgical team, said on Tuesday.
A specialist group of surgeons separated the twins at King Abdullah Specialized Children’s Hospital on Jan. 12.
Al-Rabeeah, who is also supervisor general of King Salman Humanitarian Aid and Relief Center, told Arab News: “All vital signs are normal, and they have begun to feed through a tube and are interacting normally with their parents.
“The medical team sees no worrying signs concerning the boys’ recovery.”
He added that the twins would be transferred from the intensive care unit to a regular pediatric ward within the next two days.
Al-Rabeeah confirmed that tubes inserted under the boys’ skin to remove secretions, as well as those put in place to remove bile from Ali, would be removed in the next week.
The twins are expected to stay in hospital for four to six weeks. The medical team will then decide whether they can be discharged to continue treatment at home.
The operation took 11 hours and consisted of six phases, which were completed by a 27-member team of consultants, specialists, nursing and technical staff, and based on directives from King Salman and Crown Prince Mohammed bin Salman.
The twins were conjoined at the lower chest and abdomen, and shared a liver, bile ducts, and intestines.
The procedure was the 54th successful separation case of the Saudi Conjoined Twins Program, and Ali and Omar were the fifth set of Iraqi twins to undergo the surgery.
Al-Rabeeah has expressed his thanks to King Salman and Crown Prince Mohammed bin Salman for their continued support for the program.