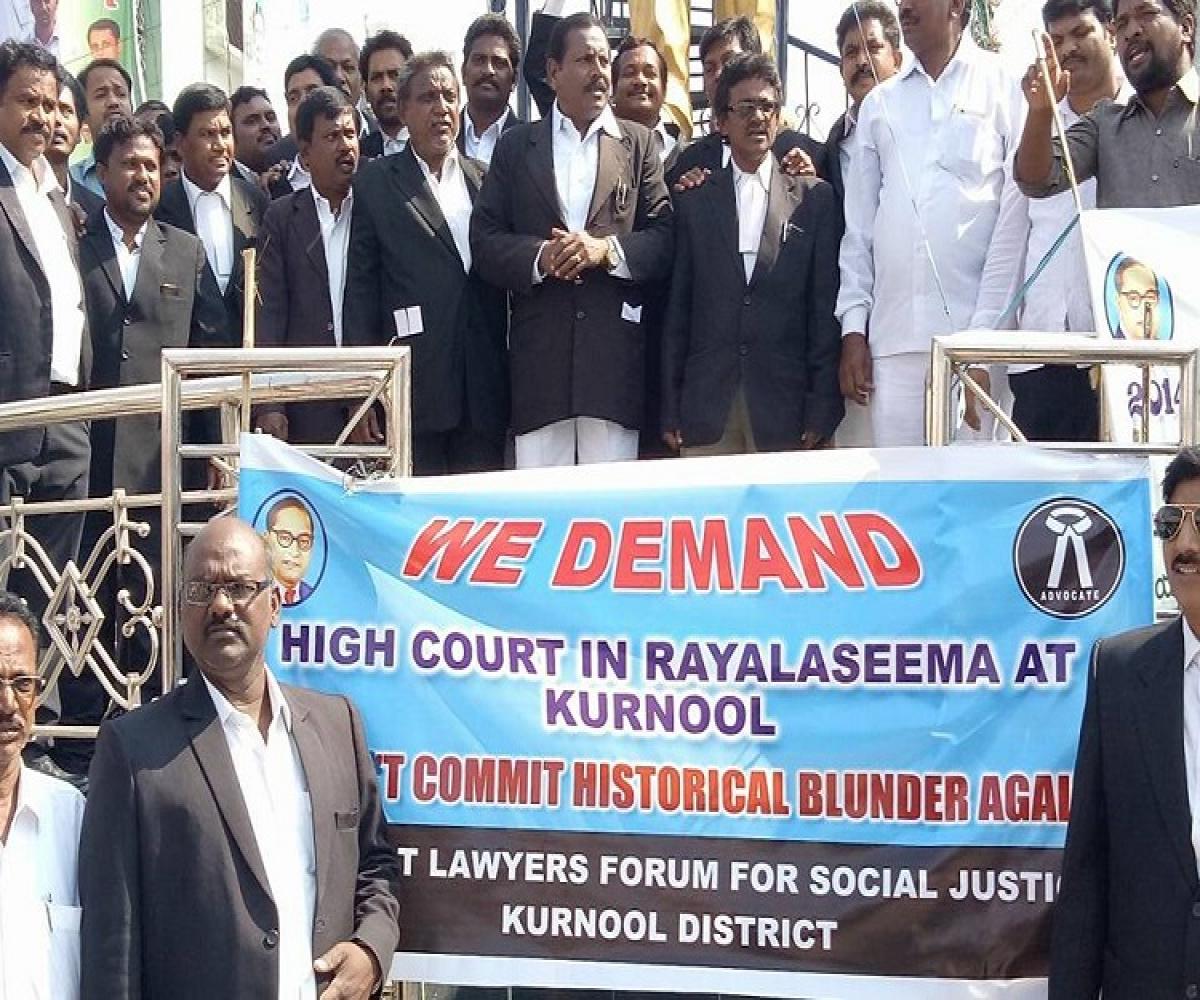 After the state’s bifurcation in 2014 for the creation of Telangana, Andhra Pradesh has been building its upcoming capital Amaravati on the banks of the Krishna River, with its latest target being the location of the High Court building.
According to reports, Chief Minister Naidu has asked for building suggestions by the end of January, so that modifications to the building can be made by April, and the court itself can begin functioning by June this year.
However, while Naidu’s government has been busy identifying buildings in Vijayawada and the capital area, others have strongly opposed this move.
Earlier this week, a group of advocates protested in Kurnool city, demanding that the High Court should be set up in the state’s Rayalaseema area. The advocates protested under the aegis of AP SC/ST Lawyers Forum.
The protest has sparked off a lot of debate on social media and some Telugu TV channels, on whether the HC should be located outside the state’s capital.
Repeating a mistake?
Speaking to TNM, advocate Jayaraju Yeggoni who led the protest, argues that centralisation of power may have its benefits, but not in this particular state.
“When the bifurcation took place, there was clear injustice. Since a lot of administrative, commercial and industrial offices had been centred in and around Hyderabad, the residual Andhra state realised that there was lopsided development. This is the same mistake we should avoid now,” he says.
Jayaraju, who is also the President of the Kurnool District BAR Association, argues that while the Executive head of the state could be situated in the capital, there was precedence for the Judiciary to be located somewhere else.
“In 1956, leaders of Telugu-speaking regions like Telangana, coastal Andhra and Rayalaseema signed the Gentlemen’s Agreement. One of the things discussed, was the location of the Executive and Judicial branches of the state,” he says.
When Andhra Pradesh was first reorganised from the Madras Province, Kurnool was made its capital and the High Court functioned from Guntur until 1956.
Following this, the capital and the High Court shifted to Hyderabad.
“With the bifurcation, we have returned to the status quo during the Gentlemen’s Agreement. It is important that we don’t repeat the historical blunder,” Jayaraju says.
Neglecting Rayalaseema
The Rayalaseema region comprises four districts – Kurnool, Kadapa, Anantapur and Chittoor.
Locals in this region have reiterated several times that their area is vastly underdeveloped, while compared to the area around the capital city or coastal Andhra.
“Locating the HC at Kurnool has its advantages. It is well-connected as it is situated close to the border. There are no issues of land acquisition as well, as there is a lot of space here. Unlike Amravati, there will be no need to acquire fertile land,” Jayaraju says.
“If the HC comes up here, the government agencies will set up a branch over here. There will be continuous inflow of people, and the Rayalaseema area will witness development as well,” he adds.
“However, if things continue like this, the demand for a separate Rayalaseema state will not be far away,” Jayaraju warns.
Echoing Jayaraju’s opinion, Rayalseema Saguneeti Sadhana Samithi (RSSS) president Bojja Dasaratha Rami Reddy told TNM, “It is unfortunate that elected representatives are outrightly violating norms set in the Andhra Pradesh Reorganisation Act, 2014.”
“Why is the government not taking public consensus into consideration? Is it fair for a few people to decide where to set up such a big institution such as the judiciary? Constant exclusion from development is not good for any democracy,” he added.
Reddy also said that they are planning to hold an all-party meet in February to support their case, and were even willing to take the issue to New Delhi.
State moves forward
However, the state seems to be focused on setting up a temporary HC at Amaravati.
Earlier this month, Naidu wrote to the Hyderabad High Court’s Acting Chief Justice Ramesh Ranganathan, urging him to check and approve one of the buildings identified for housing the state’s HC. The committee was constituted after the ACJ convened a Full Court meeting.
This came after protests rocked the Lok Sabha, forcing Union Law Minister Ravi Shankar Prasad to speak in the House on the matter of bifurcation.
Speaking in the Lok Sabha, Prasad said that Naidu had offered four buildings in Amaravati to temporarily host the state’s temporary HC.
The bifurcation would take place according to the AP Reorganisation Act, 2014, the Union Minister said.
“We are giving funds to AP government to build the new infrastructure as the present high court belongs to Telangana as per the Act. The construction and completion of new buildings will certainly take time. Meanwhile, the AP government has come out with a proposal to locate the HC in a temporary building. This should get the approval of the High Court,” Ravi Shankar was quoted as saying.
Once the building gets selected, judges will also have to be transferred and evenly distributed.
Meanwhile, the lawyers have shot off a letter to the Chief Minister: “Now, we have brought it to the notice of public. The second step would be to speak to political parties willing to support our cause. We will form a Joint Action Committee (JAC) and are also preparing a writ petition to be filed in the HC,” Jayaraju says.

Submit report on assault of 2 Dalits by BJP leader in 4 weeks: NHRC to Telangana govt