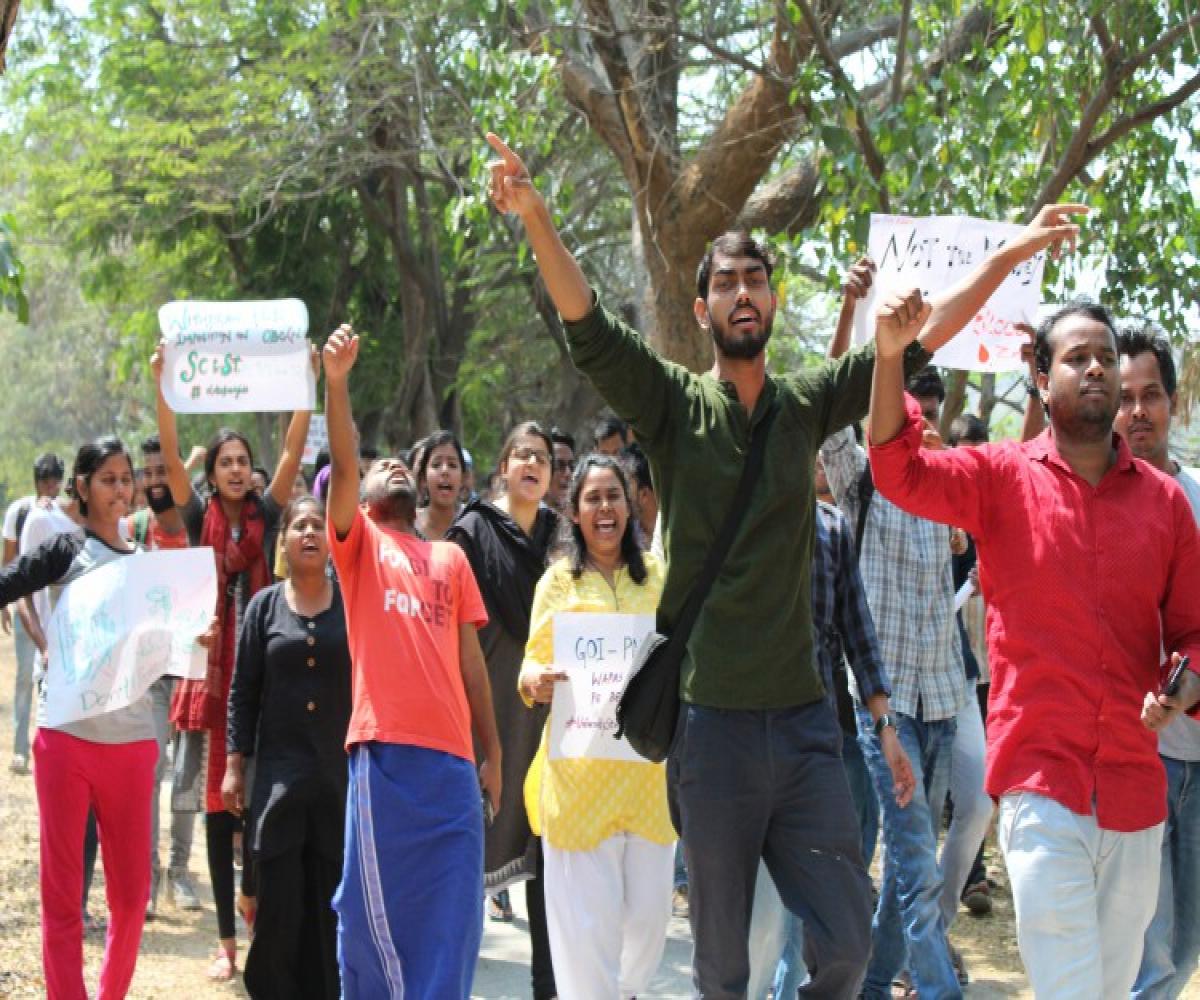 The protests against the Tata Institute of Social Sciences (TISS) management for abruptly cutting the funding of students belonging to marginalized sections—SC/STs and OBCs – entered day 2 on Thursday. The protests are going on across its four campuses-Hyderabad, Mumbai, Guwahati and Tuljapur.
In Hyderabad, students from both Gachibowli and Rajendra Nagar continued their protest against the management with slogans “We want justice”, “Don’t teach us social justice”, “Don’t teach us Human Rights” and “Practice what you preach.”
The agitating students alleged that the management was systematically excluding students belonging to the marginalized sections from pursuing higher studies.

“In the prospectus, they say just pay a nominal fee. But after joining they arbitrarily ask the students from poor backgrounds to pay money for fee, hostel and everything. This a conspiracy to systematically exclude students of marginalized sections from getting educated,” alleged Parvathy, a student of Women Studies.
According to students, the decision to boycott classes and stage protests didn’t happen in a day. They alleged that the institute has been cutting down funding for research, scholarships and hiking fees for a long time. More recently, they claim that TISS had made it clear that they are moving towards privatization by asking students irrespective of their social backgrounds to pay the fee.
“The institute alleges that there’s a fund crunch and is now asking SC/ST and OBC students to pay the fee, which they will reimburse later. But how can a student from a poor background pay Rs 30,000 to Rs 50,000?” Parvathy lamented.
Claiming a fund crunch of Rs 11-12 crore, the TISS management had in March, 2017 written to the Ministry of Social Justice and Empowerment to release a lumpsum amount. This as the state governments of Telangana, Assam and Maharashtra were not reimbursing the expenditure incurred by SC/ST students towards tuition, accommodation and others. “If we workout the amount to be received for the academic year 2016-17 i.e., the current academic year, all the campuses put together the amount to be received by TISS on behalf of SC, ST students eligible for Government of India Post Matric Scholarships, it would be more than Rs 11 to Rs 12 crore,” TISS wrote to the ministry.
In December 21, the management issued a circular stating that there was no extension to pay fees and students, including those belonging to OBC community had to pay the dues for three semesters at once. Then came another order, with the management informing SC/ST students to pay fees, which would later be reimbursed.

A students’ council member Salman said, “They are trying to divide us,” he added, “First they told the OBC students to pay money for the hostel, dining hall and accommodation. Later they included the SCs and STs students too.”
He said that they will continue protesting until the management revokes the order.
“This order makes the institute an inaccessible place for the marginalized students, and it may spread to other educational institutions as well,” he expressed.
Despite the protests, the management has not issued any clarification and has refused to speak with the media.

'I wish every family gets a daughter like mine'

Inter Board issues notices to pvt colleges on recognition issue

New GHMC Act will be introduced in Budget session: KTR