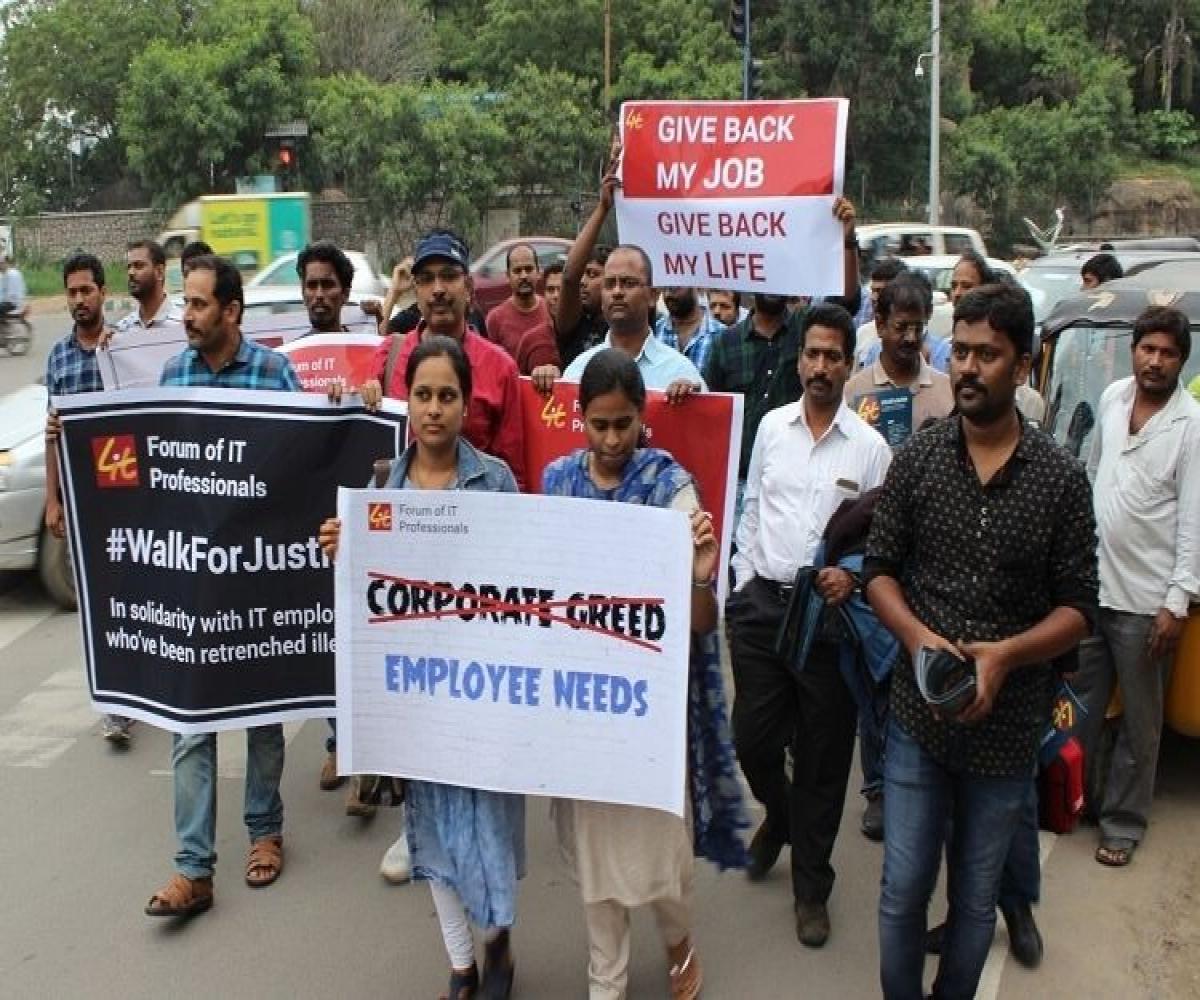 A protest march organised by ForIT.
Fifty-two IT professionals, including a pregnant woman, have filed a petition at the Hyderabad High Court against the alleged illegal retrenchment of employees by Verizon Data Services, India (VDSI).
Admitting the writ petition on Wednesday, the court directed the Labour Department to ensure reinstatement of these employees in the company. It also permitted the petitioners to serve notice to the company and posted the case for two weeks later.
According to the petitioners, they had been illegally terminated en masse and some even alleged that the company used bouncers to intimidate them and forced them into resigning.
Forum of IT Professionals (ForIT) – a group representing IT professionals in the states of Andhra Pradesh and Telangana, has been helping several such employees who have been affected by reported large scale layoffs in the IT sector in India.
In a statement, ForIT said that A Satyaprasad, the lawyer representing the techies, “informed the judge that the company forcibly obtained resignations from over 200 employees of Verizon on 12th and 13th December. In fact, bouncers, used in bars and pubs, were deployed to force the employees to sign the resignation papers. He contended that the petitioners approached the Joint Commissioner of Labour with complaints against the company for obtaining forcible resignations, but the officer failed to discharge his duties of investigating and conducting conciliation as mandated under the Industrial Disputes Act. The counsel also sought a direction to the government to withdraw all benefits extended to the company as per IT Policy since the company was illegally retrenching employees on a mass scale.”
The group accused the Labour Commissioner of not implementing the existing laws that seek to protect the rights of employees.
“According to prevailing law (Shops and Establishments Act, 1988), no employee can be terminated while their petition is pending with the Labour Commissioner. While the intent of law is to provide a just system, an equal footing to an employee and powerful institutions like IT corporations, a delay in implementing the law is gross injustice. The labour commissioner’s office, by not implementing the law thoroughly, has only helped the IT corporations and allowed the employees and their families to be thrown onto the roads,” it said.
Last year, several IT companies in India were reported to have laid off hundreds of employees across the country. VDSI reportedly had fired as many as 900 employees from its offices across India. The worst affected were said to be employees in the Chennai, Hyderabad and Bengaluru offices.
An affected employee told TNM at the time that when he refused to sign the resignation papers, bouncers were allegedly called in. “The bouncers pushed me back into my chair and held me by my shoulders till I signed the document. It was an awful experience and I can’t begin to tell how demeaning it was,” he had said.
Read: ‘Bouncers, counsellors used to intimidate us’, allege laid off Verizon employees
Towards the end of December, ForIT had also filed a petition with the National Human Rights Commission (NHRC) against the alleged “inhuman practices” adopted by companies while laying off employees.
Read: ‘Inhuman practices’ adopted by IT companies for layoffs: Hyd techies group moves NHRC
However, this is not the only instance where mistreatment has been alleged on the part of IT companies while laying off employees.
In July last year, a leaked audio clip of a conversation between an HR executive and an employee of Tech Mahindra had exposed the callous manner in which some companies were firing their employees.
Read: ‘Quit tomorrow or get terminated’: IT worker leaks audio clip of heartless sacking by HR person
After the clip started being circulated on social media platforms, Mahindra Group Chairman Anand Mahindra offered an apology on Twitter.
Show More
Share
Facebook Twitter LinkedIn Pinterest Reddit WhatsApp Telegram Share via Email Print