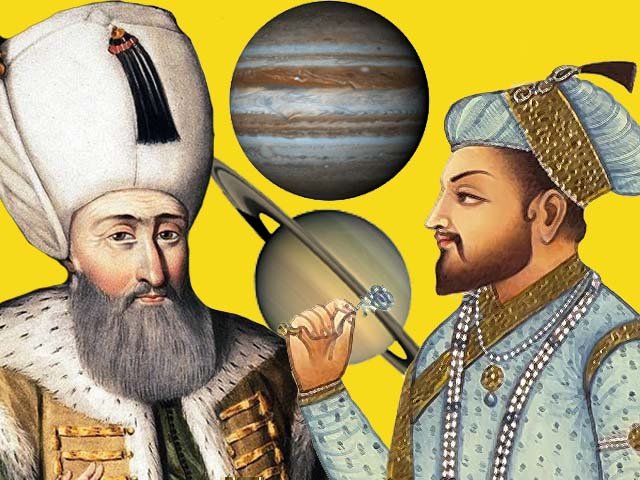 On December 21, 2020, the day of the winter solstice, the world will witness a planetary conjunction of Jupiter and Saturn. Though a conjunction of these two planets happens every twenty years or so, rarely do both of them come quite so close to each other or are so clearly visible in the sky. In fact, the last time these two planets appeared in such close proximity was on July 16, 1623; and the last time such a conjunction occurred at night (when it could actually be observed by the naked eye) was March 4, 1226.

Now, whilst this rare conjunction may not mean much to most modern observers, planetary conjunctions in general, and the one of Jupiter and Saturn in particular, has held a great deal of importance in Islamic and world history. After all, this was a time when the movements of the planets and the stars were believed to influence human affairs here on earth. Reading their movements therefore held predictive properties. A treatise containing celestial and terrestrial maps produced in 11th century Cairo, for example, held that the inundation of the river Nile could be predicted by observing the velocity of Mars as it passed the sky at the start of the year.[1] The same treatise also suggests regarding the city of Tinnis in the Nile Delta,

“This city was founded when Pisces was in the ascendant. The ruler of Pisces is Jupiter, the sign of ultimate felicity, while Venus was in exaltation. For this reason the people of the city are full of joy and happiness. They listen to music, are always delightful, seek comfort and shun anything that causes toil and hardship”.[2]

Similar considerations may also have prompted the Abbasid caliph Al-Mansur (d.775) to consult Arab, Persian and Jewish astrologers as to what day and time would be most auspicious for the founding of his capital city Baghdad in 762.

But where a great variety of star constellations and planetary conjunctions were believed to bring good fortune to rulers and their subjects, it was the planetary conjunction of Jupiter and Saturn – called ‘the Auspicious Conjunction’ – that had the most political resonance in the medieval and early modern world. Indeed, in a fragmented and crisis-ridden world in which the universal empires of the Abbasids and Mongols no longer existed, Turkmen rulers searched for ideologies other than Abbasid and Chinggisid lineage to legitimise their rule as auspicious and divinely ordained. As a result, various Sufi, astrological, Shi’i, and occult concepts became politically attractive in an unprecedented way[3]. Chief amongst these concepts was this aforementioned conjunction of Jupiter and Saturn, which was believed to mark the arrival of a divinely guided universal ruler who would fill the earth with justice and herald the end times, not unlike the Mahdi before the apocalypse. It was based on the belief that this conjunction had occurred around the time Amir Timur (d.1405) was born that the latter became renowned as the sahib-qiran or ‘the Lord of the Auspicious conjunction’[4].

From this point on, the title of Lord of the Auspicious conjunction, and all the connotations of divinely sanctioned, auspicious, saintly and messianic rule it carried, became an indispensible political concept for all Muslim rulers with universal pretentions. Most notably, Mughal emperor Shah Jahan (d. 1666), Ottoman Sultans Suleyman (d.1566) and Murad III (d.1595), and Safavid Shah Ismail (d.1524) all actively claimed it for their own political projects, and cultivated complementary images of themselves as rulers with divine sanction[5]. Far from being a mere curiosity then, the conjunction of Jupiter and Saturn was right at the centre of early modern political and historical thought from the Balkans to Bengal[6].

At the close of a year marked by so much havoc and uncertainty in our own times (as well as hope that things might change for the better with the arrival of a Covid-19 vaccine), it is worth remembering how societies in the past attempted to read planetary conjunctions such as that of Jupiter and Saturn in order to predict the future and derive comfort and assurance in trying times. Maybe then, as “the great conjunction” rolls around again and we climb onto our rooftops to catch a fleeting glimpse of this most rare of events, we in the modern world can also, if only for a moment, similarly indulge the more mystically inclined part of ourselves and view the upcoming celestial event as a most auspicious conjunction.

[3] See the introduction to Christopher Markiewicz, The Crisis of Kingship in Late Medieval Islam Persian Emigres and the Making of Ottoman Sovereignty, (Cambridge: Cambridge University Press, 2019).

[6] For more on the Balkans to Bengal complex see; Shahab Ahmed, What is Islam? The Importance of Being Islamic, (Princeton: Princeton University Press, 2015) p. 32.

The writer is a PhD Candidate in Ottoman and Turkish History at the University of Chicago. He can be reached at mohsinrao@uchicago.edu

Azmat Jah Bahadur anointed as The Ninth Nizam of Hyderabad