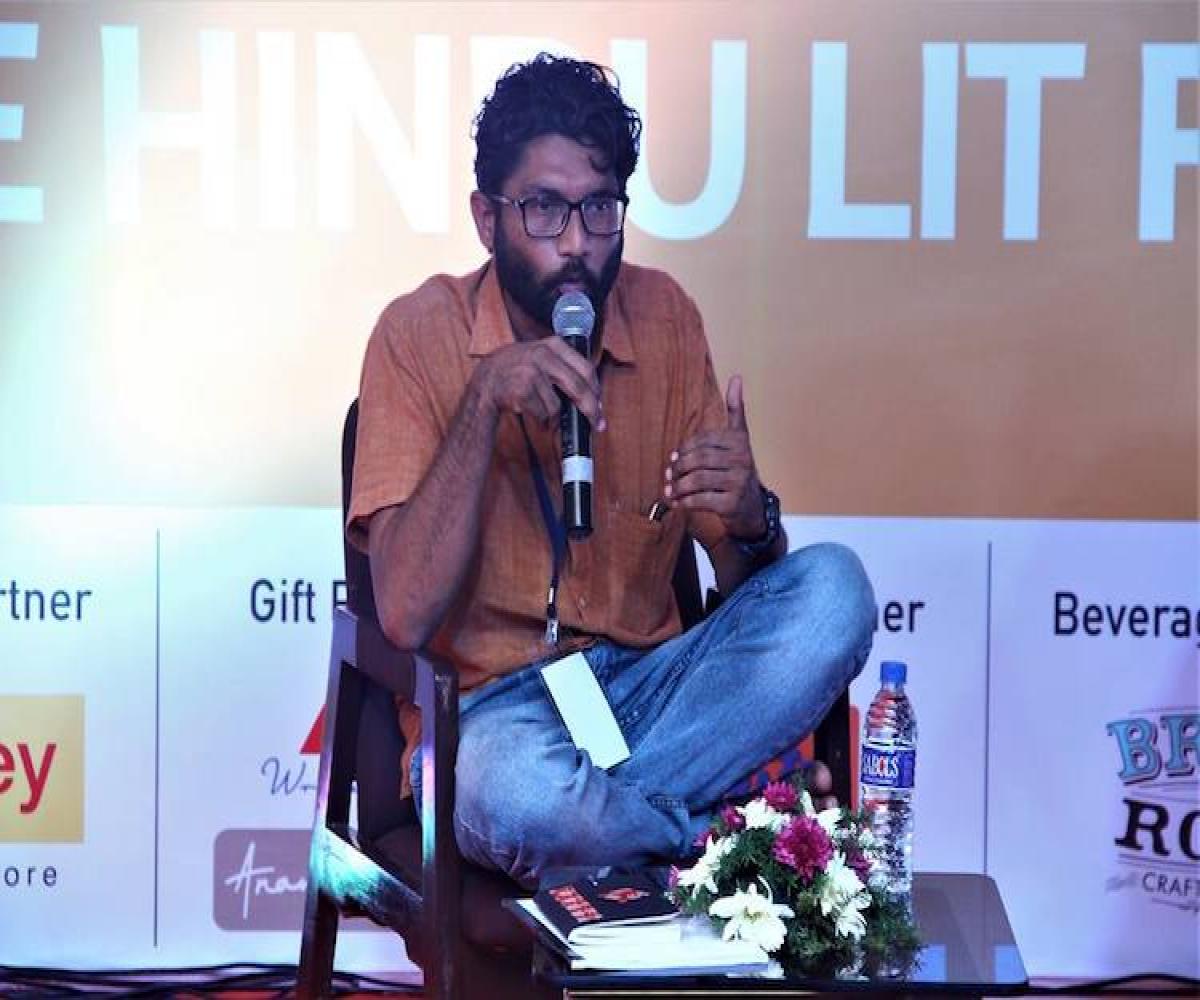 Facebook/The Hindu Lit For Life
When lawyer-turned-activist Jignesh Mevani marched to Una in 2016 with several people, a storm of activities followed that would eventually help him raise as a formidable force against the ruling BJP in Gujarat.
Jignesh rose to represent the face of Dalit activism in a state that has a violent history of Dalit oppression. From Ahmedabad to Una, Jignesh lead a yatra that was the outcome of repeated hate-crimes against the Dalits in the state. The movement marked the birth a new revolution – one that was non-violent yet very potent.
On Monday at the Hindu Lit for Life 2018, Jignesh Mevani spoke to a packed hall in Chennai. The session titled “Right to land – Right to life” saw Jignesh talking spiritedly on his ideologies, politics and developmental plan proposed for his constituency.
When asked about his activism, Jignesh pointed out that the Dalits in India are at the receiving end of twin exploitation – caste and class-based. Entangled in identity politics, many have forgotten to address the real existential requirements of food, shelter, healthcare and the likes. Jignesh also added that he is not for the philosophy of capitalism and he’d like to see the gap between classes lessen.
Adding that his entry into activism and politics has come very late, at the age of 28, Jignesh makes a strong statement on his value for human labour. “The importance to human labour appeals to me and that is why I love the philosophy of Bhagat Singh,” he said.
On his politics of love, Jignesh proposed to counter-attack the extremists who throw potatoes and tomatoes on couples who meet on Valentine’s Day. “We will throw flowers and roses,” he said to a resounding audience.
Jignesh was also very vocal on his criticism of the Narendra Modi-led government. “Modiji has to retire and go to the Himalayas. He’s actually very boring. He’s not been able to perform and has become a symbol of grand failure,” he says.
On repeated oppression and lynching, Jignesh went on to add that the cows are not holy to him. “You can have the cows. Just give us the land,” he said.
On youth politics and his plans for the youth movement, Jignesh shared that he plans to launch a campaign from Bengaluru very soon on unemployment. “In all my interviews and sessions, I have always spoken about unemployment and this is one of my prime agendas.”
On his immediate tasks as MLA Jignesh said to much applause that he plans to focus on Vadgam against the Vadnagar model of development. “Though Vadgam is my constituency, it is not the only constituency. Dalit movement, youth and working-class movement are all my constituencies. I also plan to focus and shape the Dalit movement, to transcend Dalit identity. I am also very much involved in activism for riot victims, sanitation workers and farmer suicides. I mainly plan to focus on public health and education.”
As a favour Jignesh appealed to everyone saying, “If you are an expert at something come to Vadgam to share your knowledge. If you can help someone to file an RTI, come to Vadgam. There are 146 villages in Vadgam and I plan to make it the coolest and (most) happening place in the country.”
Show More
Share
Facebook Twitter LinkedIn Pinterest Reddit WhatsApp Telegram Share via Email Print

She has cancer and is in pain, she's just 10 yrs old: Your help could save her life